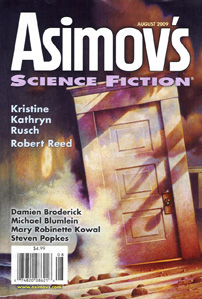 It appears that Broderick has been called “The Dean of Australian Science Fiction”, and here he presents his credentials with regard to some hard SF blended with the softer human side of the genre. There’s generally plenty of the former in SF, and not as much of the latter as there should be.

A tribute to past tales of enhanced children, Broderick looks at the problem of the generation of children who spring from genetically modified super-bright parents.

For Saul life is in many ways similar to that of any normally intellectually gifted child – having to negotiate school life with its ever-present jocks offering a clear example of the more physical approach to life. In the school canteen with three fellow geniuses (Ruth, Marius and Janey), he expounds his desire to explore and clarify the qualia to which the story title refers. As any fule kno, qualia are in fact units of conciousness and raw feelings and the experience of sensations.

Broderick sets the story against a well defined social and cultural setting, giving Saul a solidity of character that often is misses in stories where there is a focus just on the science, and all that is provided is a cutout of a white-coated scientist addressing a tricky scientific conundrum. This is welcome, as Broderick does load a lot of technical background into the use of plasmids to create the super-intelligent, thus providing a story that refers to Depeche Mode, the X-Men, and Ford Focus hatchbacks at the same time as providing a sentence like : “Mostly its an unstable CHRM2 allele, plus downregulation of dysbindin SNP”.

We follow Saul and his three friends, mostly Ruth, through the years as they use their skills in various ways – Saul to write a best-selling fat fantasy book – until they can buy the first commercial 1024-qubit adiabatic computer. Saul, in telling us this story, reflects on his experience as a fantasy writer which taught him not to info-dump, by means of an apology prior to a hefty info-dump, lulling the reader into a false sense of security as we then have Ruth killed off in a car crash.

This sets up nicely for the dramatic denouement, in which the trio use their new kit to encode Jane’s memories, which are then overlaid onto Saul. The experiment is a startling success, enabling Saul to see the world through her memories, through her eyes and, most importantly, through her emotions. And that gives Saul a huge surprise, and a challenge for he and Jane to address.

It’s an excellent opening to the issue, getting the balance between hard SF and soft SF just right.

As with Broderick, Reed succeeds in addressing some very human frailties and emotions, only in a far future setting normally used for drama, adventure, intrigue and the like. He considers what extreme longevity will do to a person, and uses the elderly Hogan, several centuries old, and a regular in a local bar. A fellow regular becomes intrigued by the set in his ways Hogan, with his store of memories which are regularly drawn upon, the same old stories trotted out at regular intervals. Even death doesn’t get in Hogan’s ways, as having lost his corporeal presence, a virtual avatar is substantiated.

A second story in Asimovs for Zumsteg. His first one (Usurpers in Sept 2008) didn’t do that much for me, but this one does. It’s a claustrophobic setting, with the two remaining out of a seven person mission to a black hole, finding themselves at risk of going beyond the event horizon, drawn into the black hole that is anomolous in several ways – notably in being blue! There’s a palpable sense of sexual tension between the two – Sigurd, whose academic credentials are somewhat less than the more academic Rivka. As they try to work out what is happening, we find out about them and their working (or not-working) relationship and what happened to the omelettes.

It’s a well-handled story for a new writer, boding well.

A close look at the psychological issues relating to cloning. Suffering the after-effects of a car crash, Elise is reluctant to leave the house, suffering flashback and absences. Her husband, Mung, is working on a cloning project, and in creating a clone of himself he unwittingly creates a virtual menage-a-trois. His cloned self, confined to the lab, is a perfect copy and fully self-aware, and of course misses terribly what his memory tells him is his wife. In the short piece, Kowal explores the clone’s reaction to his circumstances, and how this alternate husband, suffering the horrible pangs of separation, in effect feels a greater love for his wife than does the ‘real’ husband. Is suicide the only way out for the clone?

Neanderthals raise their ridged-brow heads again. The two boys are two generations of children created with neanderthal DNA. The reaction of society to this new race of people, at a macro and micro level, are explored. We follow the first of the children through an awkward time at school, and a further generation as one of their leaders is assassinated live on TV. It’s by its very nature a quick sketch, which works fine as far as it goes – but it is a quick sketch rather than a Grand Master.

A three-pager in which a very well-travelled executive finds himself sitting next to a traveller with a track-record of being on flights on which problems occur, which gives him a lot of pause for thought.

Cremating his recently-deceased father proves rather more difficult than the protagonist expects. Quite simply, the bones won’t burn. It’s not absolutely unheard of, but very rare. Back home with a box of bones, things get stranger as a very strange pair of men in suits turn up at the door. They are interesting in his father, and would very much like sight of the bones, and have official business cards that would get them entry, but the son has his reservations. His mother is nonplussed, but the old friend of his father is able to throw some light on the situation, or, rather, to indicate that there is something on which light could be thrown, but who is unwilling to turn on the light.

An excellent issue. Rusch and Popkes perhaps the slightly weaker of the contributions, Broderick and Reed edging ahead of Blumstein, Zumsteg and Kowal.