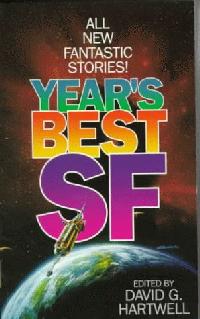 Not a full review, as the summaries were written some five years ago!

Dino-like aliens, the Hanen, have the technology to encode individuals and transmit them vast distances as superluminal signals. Kamala Shastri is transmitted, but not without problems. And the resolution of that problem is a major challenge to the human who is involved in the transmission of those signals.

Patricia A. McKillip. Wonders of the Invisible World.
Originally in : Full Spectrum 5

An angel appears before Cotton Mather during the Salem witch-hunts. But rather than being a servant of the Lord, the angel is an angel from the far future.

Two astronauts have trouble with a wormhole and crash land on Pluto. They find a form of life which spans space between the planet and its moon/sister Charon. Faced with being stranded, the pair try a bizarre way of getting home to Earth.

Gregory Benford. A Worm in the Well.
Originally in : Analog

Faced with financial ruin, the protagonist takes on a mission which takes her close to the Sun. A surprising find takes her even closer. Hard SF, to the extent it slips into Diagram Supplied Territory, but the characterisation of the lead absolves Benford.

Captain Armageddon, a star of a VR sex soap goes amok in cyberspace, causing major problems under the ‘highway’. Bloom goes under the highway to sort out the problems, which get gradually more threatening. He finds love, but it cannot last. One of the pick of the collection.

Far Future sculpture competition on Earth. In the war with the Fwndyri, the planet has been reduced by nanophages, to little more than dust. Worse is to come, and the narrator’s affair with White Hill is challenged by the one possible means of escape.

William Barton. In Saturn Time.
Originally in : Amazing: the anthology

Alternate History/Future of US space travel, with the US administration getting full value money from multi-stage rockets. Same theme as the author’s ‘Changes’.

Sov is approaching her kemmerday – her coming of age. In the kemmerhouse Sov undergoes an awakening/transformation.

Jeremy Baker is the only survivor when his ship ‘s Warton-Purg drive delivers the vessel into the vicinity of a black hole. His survival is not going to be a lengthy one, but he has three attempts to avoid falling into the black hole. When these fail, he goes on a journey…

The impact of antibiotics failing to control bacteria on suburban America.

Andra lands on an unexplored planet, protected from the dangerous alien habitat by an AI pelt. However, DNA level problems threaten to kill her.

In deep winter by a lake, an alien craft and its occupants have a major impact on a troubled family. Stephen King territory, with a protagonist who has a very cynical view of women.