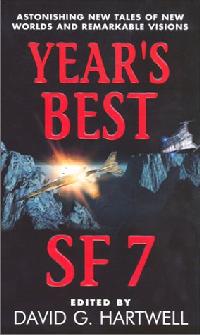 As per my usual routine, a run through the stories in the order in which they appear. Those stories which I reviewed during 2001 will for the most part have the original review quoted.

In my review last year I wrote:

A jokey in style story about a supernatural private eye, set in New Orleans, similar to the milieu of Albert Cowdrey’s stories in Fantasy and Science Fiction.

An ancient, terribly ancient artefact has been unearthed, and proves to be very much not of this earth. To my mind the jokey style of the story simply sits on top of an otherwise straight story, and the whole doesn’t quite work.

Richard Chwedyk. The Measure of All Things.
Originally in Fantasy & Science Fiction, January 2001

In my original review I wrote (mis-spelling the author’s name!)

When I read this in Dozois’ 19th Annual Collection, I wrote:

Swanwick has been providing regular ultrashort stories for SCI FICTION, and as is the case with such fiction this has a simple premise, and little else. Orson Scott Card’s ‘Ender’s Game’ conceit is taken to the logical nth degree, with a most typically teenage teenager having control of galactic destinies.

Brian W. Aldiss. A Matter of Mathematics.
Originally in -read below!-

The copyright listing identifies this story as appearing in ‘Supertoys Last All Year Long’ in 2001. It actually appeared, two years previously, in the ‘Moon Shots’ anthology, albeit under a different title (Apollo Asteroid) and in a slightly different format. You can forgive the editors for not spotting that, but bizarrely, that previous story appeared in Hartwell’s ‘Years Best SF 5’. Duh?

When entering details of that story into the ‘Best SF Database’, I summarised the plot as:

Hmm. In his intro. to this story, Hartwell mentions that Morrell is a writer with a long track record who only turned his hand to short SF last year. Having non-SF authors write SF was evidently part of Redshift’s editor, Al Sarrantonio’s plan. Well, to my mind, this one is a pretty poor example of SF.

The plot is mawkish and improbable: middle-age father suddenly develops terminal disease and has just days to live. He is put into deep-freeze to hopefully wait for cure to be found for his disease. Young son swears to grow up and find a cure for dad’s disease. Forty-ish years later, son, now grown up, finds cure for disease! Dad is underwhelmed at being woken up after so long a time. Dad/son relationship is awkward as son is now older than dad! Son gets struck down with a stroke, and will almost certainly die, so dad pops him into deepfreeze to await medical science advancing to the point when he can be treated.

When I reviewed this in its original magazine appearance I wrote:

Hartwell chooses a Big Name, but the Shortish Story is Off Little Consequence. A few pages sketching out an alien world and its inhabitants, and outlining the strangeness of the two races, one of which has an unfathomable urge to build.

In my original review I wrote:

An interesting read. An alien infestation is growing at random on Earth, strange shrub-like plants that are architectural in design, evidently mimicking buildings and features from Earth.

Sam Cadrey finds one growing in his garden, and he determines not to hand control over to the authorities and the experts, but to play a more active role in harvesting the hedges. He finds out, however, that the ability to mimic is greater than is evidently known, and the alien artefact/plant furnishes a pretty good replica of his deceased wife. But there appears to be another alternative, which offers Sam a proper First Contact.

Another dip into one of the major anthologies from 2001. Disch provides two perspectives on afterlife. In the first the male protagonist is in some kind of commercial virtual afterlife. When the downpayments for said afterlife prove problematic, he has to pay his way, but instead of washing the dishes in the kitchen, he takes on a female form and provides another kind of service.

A curious story, always staying just out of the reach of comprehension.

Lisa Goldstein. The Go Between.
Originally in Asimovs, March 2001

When I orginally reviewed this story I said:

Majli Iris arrives on Malku, a newly appointed Ambassador, to negotiate an expansion to their presence on the planet. The Hrawu have taken to the dogs brought to the planet, and Majli ponders what this promiscuity of affections may mean. A violent attack on a Hrawu threatens to disrupt the negotiations, but in the end leads to a revelation about the nature of the alien/canine relationship.

Another good, though not outstanding, story.

Another big name author with a story from the Redshift anthology.

The tone of the story is redolent of Philip K. Dick, and the plot similar to Stephen King’s ‘The Running Man’. A man is given a large sum of money, and his face is transmitted on TV. He therefore becomes the hunted, and has to hide. However, his experience as a hunter allows him a better chance of survival than most.

Throughout the story there are a few twists and turns, with characters turning the tables on each other. And finally the hunted becomes the hunter.

A quite gritty Wolfe story, although far from his best, and not readily identifiable as being one of his stories.

Yet another story from Redshift, and yet another Big Name. And again, not Earth shattering (apart from the plot, that is). Silverberg also collected this story in his annual collection, and reviewing it there I said:

The moon is found to have shifted ahead of its orbit. The scientists of the world are bemused, until one suggests an explanation. The nature of the explanation, and its implications for the future of Earth are worrying.

Hartwell looks beyond the US for the only time in the volume. When reading this story last year I wrote:

Reynolds has had several stories appear in Interzone, including ‘Galactic North’, and ‘A Spy In Europa’, which have been collected by Gardner Dozois in recent annual collections, and ‘Hideway’ published last year. ‘Merlins Gun’ was published in Asimovs (May 2000) and ‘The Great Wall of Mars’ was published in Spectrum last year, and this story is a follow-up to ‘Great Wall of Mars’. I’ve enjoyed all of the aforesaid stories with few reservations, so it with a bit of disappointment that I have to report being slightly less enthusiastic about this story. Whereas the others are uniformly quite inventive, far-future stories, this, whilst retaining a far-future setting, comes across as a more workmanlike story – a distant planet with a secret to be found, and a mystery to be solved. Still good, mind you, but more of an Analog story than, say, an Asimovs story, if you get my drift.

Reynolds now has a trio of hefty novels to his credit, the first two of which I have read, and are proper ‘tour de forces’ (or ‘tours des forces’?).

A strange collection. Several stories from Redshift, none of which, to my mind are worthy of inclusion. The SCI FICTION selectees are mostly of a high standard. The Asimovs/Analog/F&SF stories could almost have been chosen at random as they don’t, to my mind, stand out from the vast majority of stories from those magazines during 2001. The inclusion of the Aldiss story in both Year’s Best SF #5 and #7 is worrying – how does something like that happen? There is to my mind, a sneaking suspicion that Hartwell has several names in mind each year, and they get a story in on the strength of their name rather than the story itself.

So, having read Silverberg’s and Dozois’ Years Best, what of the selection of the three anthologies?

Dozois has, of course, the advantage of size (!) in that he can include more longer stories, and more stories per se. (Last year Hartwell tried with his #6 to boost up his number with a number of micro stories form Nature), and his collection had to my taste, the biggest proportion of stories whose inclusion I agreed with. Silverberg’s collection was more to my taste than that of Hartwell’s, although I do object to Silverberg’s collection being put together absurdly quickly, and presumably excluding some stories published late in the year from inclusion.