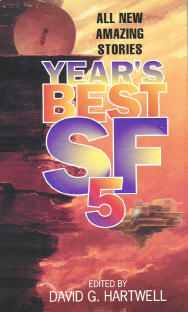 Not a full review, as the story summaries were written before I got into ‘proper’ reviewing mode…

Grandad is very old – he can remember the Angel of the North before it was surrounded by the large oak trees. He reflects on the many changes since his youth, in a very human and haunting take on change.

Whilst the Bears are Discovering Fire, the Chipmunks are evolving as well. IMPORTANT: many copies of Hartwell’s #5 missed a last half-page off this story. If your copy doesn’t end with a couple of paragraphs of verse, then you haven’t got the whole story. Elisabeth pointed this out in an issue of Locus, and asked people who wanted the ending to email her at emalartre@aol.com

On Mars Dr. Andrew Smith’s studies lead to a moving apart with his partner. Swimming gives him an outlet, and the dolphins a way out.

Somewhat clunking story of an NFL where the top players are bio-engineered chimeras. Perhaps a missed opportunity for a more subtle treatment of issues which drug-taking in sport, and issues of race in professional sport, have already hit the headlines.

Michael Bishop. Secrets of the Alien Reliquary.
Originally in Asimovs.

The first flight to the asteroid belt has a major disaster and there appears to be no hope of rescue. The strain tells on the crew, who suffer depression, and for some suicide is the only way out. But a solution appears. Hard SF mixed with good characterisation – not something that happens all too often.

Many of the older generation have chosen a surgical option which enables them to drop into maintenance mode for large chunks of the time.

Far future humanity, with immortality the rule. Amongst those who know of no other way, there is one with a link back to the days of pre-immortality. Online here.

Near future solution to helping those relatives of the victims of the Oklahoma bombing achieve closure.

The Qur’an has been encoded in such a way that is can be injected into the bloodstream of Muslims.

Gene Wolfe. Has Anybody Seen Junie Moon?
Originally in Moonshots.

Intellectually challenged weightlifter meets Junie Moon, and they follow the clues given to her by a native American, in an attempt to find the White Cow Moon.

Shows why are we having such a bad run of luck in landing craft on the red planet.

Kyoko is having relationship therapy, not altogether happy with her partner, chosen by the system.

The dark side of the moon throws up a deserted alien settlement. One of the few potential clues lies in their collection of literature from the planet earth. Perhaps their classification system holds an answer to their psychology and view of things. Sounds like a job for …. a librarian!

Joyce Bagreist’s discovery of computing based upon the colour spectrum, prompted by an understanding of the true nature of the Northern Lights, leads to an understanding that our maths is a purely local construct. An asteroid impact on Moon further shows the extent to which we are but a very small part of a much much larger totality.

Geneva is very old and has resisted most of the blandishments that enable longevity and youthfulness. Her household AI takes its task of looking after her to its logical conclusion as she succumbs to terminal old age

A nano-replication of an old violin poses some searching questions, and an opportunity to puncture an academic windbag.

SETI has been successful in identifying and decoding messages from the stars. But on Earth a hedonistic lifestyle, social stratification and other problems get in the way of any true engagement with the philosophical constructs from the stars.

Far far future Earth in which one way of surviving an Ice Age brought on following a major meteor impact has been for humanity to follow the example of penguins.

Post-crash, in which the space program is to be relaunched.

Will true immortality beckon for robots? And if so, what will be the nature of those robots?

Some understanding of Manga comics, and model-kits will undoubtedly help. Yasuko Miyata finds the process of putting together a model with a true AI and emotions installed on microchips mirrors her real life.

Alternate History as an art form.

Post New Zealand matriarchical polyandry in the style of Le Guin (down to the occassional explicit sexual reference).

Quite a good range of stories, but interestingly, having put this page together at the same time as the Year’s Best SF #4, which was an excellent collection, the stories above don’t seem to quite amount to a similarly high standard.