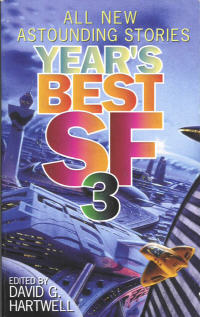 These story summaries were written a couple of years ago, and are not as detailed as is my current wont.

A man and an aged dinosaur are reunited and look back on a day when they were much much younger, and much freer.

Very post-modern. Perhaps this may be a revisiting of the ‘poetry’ which was in vogue in the 60s (see the Poetry Oh Dear theme)

Teenagers going through an awkward phase face the potential horror of being visited by future versions of themselves.

A far future, spacefaring and cruel genmod race make contact with a potential victim. Will they observe Guest Law?

Future in which the written word has disappeared, and the population have an ever present computer voice to guide and educate them.

The dividing line between the PC operating system and those operating it has changed. Inside Windows Office a romance blossoms. Ahh, Paris in the Spring.

You wouldn’t want to live forever, would you, asks Mr. Pale. Ooozes class!

Brian Stableford. The Pipes of Pan.
Originally in :

What if emotions were subject to seasonal changes as with high fashion?

George is made an offer he cannot refuse, and finds himself involved in industrial espionage. He is caught, but it turns out all right in the end.

On board a ship a complex relationship between a husband and wife, and his clone, who is taking the husbands place at certain times, is violently resolved.

Alternate History in rural SW England. Against a backdrop of an English Civil War, a rider drives into a small village. Retelling of a standard US Wild West scenario.

The Scientist and Her Beautiful Assistant. Excellent short spoof of Golden Age of SF. Almost makes you mourn for a return of the Asimovian Heavy Hand of SF writing.

A murder mystery set against an Amish background. Borderline SF.

Where do those frogs come from? Ribbit. (That’s the sound English frogs make, unlike the reebeeb, beebeeb in this story)

Stylish near future story of a London entrepreneur. Borderline SF.