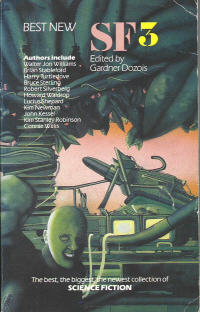 These story summaries were written sometime between 1990 and 1996.

Anthony Maldalena is keeping himself busy by studying the communication of, and communicating with, both the whales and the ‘Deep Dwellers’ of the remote planet he has ‘run away’ to. A Kyklops, using a human body, controlled through an n-dimensional interface is interested in his work, but he keeps himself to himself. Philana Telander, a young researcher with interests similar to his turns up. After becoming lovers it transpires that Philomena is another alter-ego of the Kyklops, from birth implanted with a device that allows it to enter her body and experience and record her memories/emotions etc. The couple decide to fight to remove the Kyklops, and also make first contact with the Deep Dwellers of the planet.

Brian Stableford. The Man who Loved the Vampire Lady.
Originally in :

Bruce lives on the outside of a skyscraper – him and many others – on account of not being able to live inside. Cyberpunk mountaineers, I s’pose.

Harry Turtledove. The Last Article.
Originally in : The Magazine of Fantasy and Science Fiction, January 1988.

An oldster refuses to be brain wiped – a process which removes old memories to ensure that the volume of memories doesn’t become fatally too large.

Mike Resnick. Kirinyaga.
Originally in : The Magazine of Fantasy and Science Fiction, June 1988.

Kenya recreated in an orbiting spaceship.

Bruce McAllister. The Girl who Loved Animals.
Originally in : Omni, May 1988.

Jan 2005 : For those of you who don’t know, Willis’ story is a near-future one in which she vividly portrays the individual human loss which, as she says in her introduction, is often missing in post-catastrophe stories. In a near-future eco-shambles, mutating viruses have wiped out a lot of the canina population, the roads are jammed with huge water tankers but little other traffic, and (as per the title) the huge RV’s are an endangered species (no loss there, as the problem with such vehicles has got a lot worse since the story was written). A journo/photographer has to cope with the loss of his dog, and his relationship, and the owners of the Winnebago are in a perpertual state of grief over their departed dog.

A DA arrives to interview a suspected serial killer, to try and tidy up a few cases on his files. The killer is responsible – and more.

The hob are creatures of folk-lore living on the Yorkshire moors, hob(bit) like but survivors of a centuries-old crash-landing of an alien spaceship.

Bruce Sterling. Our Neural Chernobyl.
Originally in : The Magazine of Fantasy and Science Fiction, June 1988.

Time traveller gets stranded back in neanderthal times, but gets on famously with the natives.

Jan 2005 : Effinger very effectively illustrates quantum theory through the eyes of a young arab girl, waiting, knife in hand, for a possible assailant. We see possible resolutions to the scenario, which include one in which she is rescued by a Westerner and lives a long life married to Heisenberg.

Howard Waldrop. Do Ya, Do Ya, Do Ya Wanna Dance?
Originally in : Isaac Asimov’s Science Fiction Magazine, August 1988.

Some band, some music, some reunion.

Brian Stableford. The Growth of the House of Usher.
Originally in : Interzone 24, Summer 1988.

Namesake Usher builds an organic monstrosity of a house.

It’s Boston, but the glacier’s continuing its southward journey. A boy-coming-of-age story.

Cyberpunkish future in which programmers create a life for themselves inside their mega-network when a life for them proves impossible in ‘real life’.

An ancestor’s findings in a pit are re-enacted centuries later.

Pat Cadigan. It was the Heat.
Originally in : Tropical Chills.

Cullaene is a Riiame, an indigineous shape-shifting race whose form is chosen at birth by their parents, living with a family of colonists, whose adopted daughter is also (unkown to anyone) also a Riiame, and about to undergo the skin-shedding Change.

Global warming puts town under water. Not everyone leaves.

Linked by a tachyon thread to an FTL probe headed for Proxima Centauri, the two ‘glass heads’ face a far greater gulf.

What Hollywood would have been like if aliens had invaded early in the century.