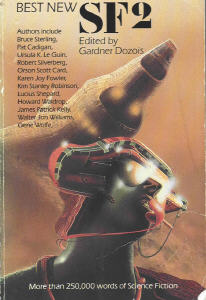 A scientist writes his dead daughter’s brain pattern onto one of the chimps he has been raising and studying. After his death the chimp, to all intents and purposes the daughter, battles for her survival.

Bruce McAllister. Dream Baby.
Originally in : In the Field of Fire (Tor).

Medic in ‘Nam starts to suffer from premonitions regarding her comrades, and is transferred to a special unit with others with similar talents.

A steampunk? Tokyo with electricity impacting on the society.

“..traces the intricate machinations of a group of immortals who live in the interstices between the many worlds of possibility..” – couldn’t have said it better myself, Gardner.

Paul J. McAuley. The Temporary King.
Originally in : The Magazine of Fantasy and Science Fiction, January 1987

A rural village, effectively cut off from the outside hi-tech world, is profoundly effected by a visitor from that outside world.

Maggie’s dad disappears on a visit to the 7-11 one evening, and her mother dies, leaving her to live with Aunt Grace (obsessed with espionage) and Uncle Ned (don’t ever sit on his lap, girl). Oral Blue, a colourful local, manages to become (became) big in olives, and saves the day.

Young Myra falls out of the sky into a very strange dreamland, and is befriended by coyotes, chipmunks and other spiritual animals.

Entities, aliens with attitude, take over Earth, leaving many of its inhabitants doomed to forced-labour of one kind or another. ‘The Pardoner’ has the electronic wherewithal to assist a lucky few to avoid the worst fates.

Seven years after first contact, an artist is enabled to build his dream : an enormous glass cloud.

Octavia E. Butler The Evening and the Morning and the Night.
Originally in : Omni, May 1987

DGD, a disease that causes self-mutilation, is hereditary. Lynn is double-DGD (both parents had it) and appears to have few prospects.

Howard Waldrop. Night of the Cooters.
Originally in : Omni, April 1987

HG Wells’ Martian visitors land in Texas, and some good ol’ boys give them more trouble than they can handle.

Angel is an outcast from another planet, who befriends a human heamaphrodite. Angel is finally hunted down by a fellow ET, leaving the hero/ine to find other such outcasts.

Lucius Shepard. Shades.
Originally in : In the Field of Fire (Tor)

Tom Puleo returns to ‘Nam to cover a story regarding a ghost-like reappearance of a notorious GI.

The Lone Ranger and his faithful sidekick and Displacement Theory.

Avdotya Nazarovna struggles in a barren post-catastrophe environment, to come across duck-like aliens, the true architects of the disaster that has befallen Earth.

An antique clock in a church offers a glimpse of a possible future dominated by intelligent machines.

A fairy tale – half Brothers Grimm, half Bram Stoker.

Michael Flynn. The Forest of Time.
Originally in : Analog, June 1987

An Alternate History/Multiverse view of the States in Pennsylvania. A good knowledge of American history probably required to get the most from this.

Dean Whitlock. The Million-Dollar Wound.
Originally in : The Magazine of Fantasy and Science Fiction, January 1987

In a future US-Mex? conflict wounded GIs are patched up and returned to the front, even after major injury.

Native Americans on a reservation are led by a young girls with visions to a different plane of existence.

America under the rule of Communist China.

Gene Wolfe. All the Hues of Hell.
Originally in : The Universe (Bantam)

A organic robot, and two humans (one psychotic?) locate a shadow world which may be Hades. Or something else.

Michael Bishop. For Thus Do I Remember Carthage.
Originally in : The Universe (Bantam)

Technically advanced Roman Empire has to face the facts of evolution.

Climbing Everest without oxygen, but with a sherpa with abilities similar to the ATV Champions.