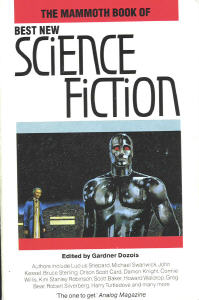 Dozois’ annual collection was first published in a UK edition with this volume, under the title ‘The Mammoth Book of Best New Science Fiction’. Subsequent UK editions have largely stuck to Year’s Best SF #x formula, although not rigidly.

If war is hell, then future war is more hellish. Mingolla finds a short spell of R&R to be anything but restful in an intense few days. Vivid and draining.

What price Paradise? A an idyllic planet has achieved a state of nirvana, but only at the expense of the indigenous peoples.

Is virtual immortality and adoration sufficiently attractive to take the step of leaving the mortal plane (or disco)?

Robert Silverberg. Against Babylon.
Originally in: Omni, May 1986.

Forest fires on the west coat, set off by aliens landing in their spaceships. As one man pilots his plane, attempting to quench the fires, his partner is drawn to an extra-terrestrial future.

Charming tale of First Contact set against a background of a near future Thailand with a family run cinema.

Fantasy set in an ancient Rome milieu. A young nobleman marries a young woman from a travelling merchant. His lifelong friend is convinced that she will bring harm to him.

Following First Contact, things are changing. In Venice, with walkways floating above the canals, a young boy has the opportunity to transcend his mundane life and bickering parents.

A bleak near future scenario, with society falling to pieces, and nuclear war imminent. In a church a very curious presence is manifesting itself. Can this be a means of salvation.

A man, young in appearace, ancient in truth, is touring the USA wreaking his own subtly terrible acts. He meets a young woman for whom his lifestyle is attractive.

Bruce Sterling. The Beautiful and the Sublime.
Originally in: Asimovs, June 1986.

A slightly strange departure for Sterling featuring a group of effete dilettantes in the not too near future and advanced hang-gliding.

Somewhat Bradbury-esque tale of a recently widowed Jewish man, who is using his artistic bent to remove prison camp tattoos from holocaust survivors. But he removes more than their tattoos.

A disturbing horror story. As a child, Roger’s ‘invisible friend’ had been what would have been his older sister, had she reached full term and been born. This freaked his parents out so much that they abandoned him. After many years, his sister has found him again, and Roger seeks his parents – and meets them, in a nightmarish night on which the ‘scissor men’ are abroad.

A high tech data heist leads to the Prison of Chillon, and the eponymous prisoner, imprisoned by his disabilities and more.

A suburban wife on the edge of a breakdown returns to her alma mater, and finds herself haunted by her lost love, and her sense that her life could have been that much different with a few different words.

Harry Turtledove. And So To Bed.
Originally in: Analog, January 1986.

The diaries of Mr. Samuel Pepys viz. the Missing Link in the Americas, and the slavery of those thereof.

Ernest Hemingway and his faithful gun-bearer go hunting in the Alps.

A near-future drug scam, in which the protagonist escapes with the goods, but makes a big mistake in leaving his erstwhile fellow conspirators alive.

Enjoyable sort-of Alternate History, with the Wright Brothers attempting their powered flight with an audience including Pat Garrett and the Red Baron.

If only he could play the gee-tar like Jeff Beck.

A girl, raised in the forest by apes, tries to make a success of life in the ‘civilized’ world, but even a lesbian relationship cannot stop her from returning to the trees.

A hot summer in Washington DC. Near future, and society is struggling. The ‘haves’ are fine, the ‘have-nots’ have limited options. Growing marijuana is Leroy’s means of making ends meet, but when persons unknown raid his plants, he finds that there aren’t many options left.

A combat pilot has had his neural bits and bobs interfaced with hi-tech. Now in civilian life, he is not finding it easy to live with his enhancement.

A young girl finds a special place to visit – a dangerous place not of this world. Her grandmother, who is attuned to these things, offers her hope.

Virtual movie stardom – just how real is the construct which was until recently a living person?