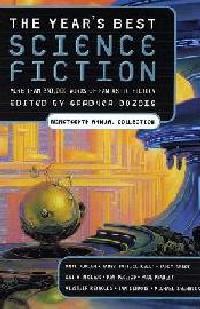 Is it really a year since the last Dozois’ Year’s Best?

Last year’s volume was a departure for me, as it was the first one I had read having had read a fair amount of magazine SF in the year it covered. Last year I read every story in Asimovs, Analog, Magazine of Fantasy & Science Fiction, Interzone, and Spectrum SF, and as a result I was familiar with the majority of the content in this volume. However, I hadn’t been reading Ellen Datlow’s excellent SCI FICTION, and hadn’t read the two major original anothologies, Redshift, or Spectrum3, so some of the stories were new to me. However, as Robert Silverberg had sneaked in his Year’s Best volume some months ago, I had read some of those in that slimmer volume.

So I shall go through the stories in the order they appear in the anthology, reproducing my reviews from when stories originally appeared, with a few additional comments on the way, and a conclusion at the end.

A classy story. Tom Kelly is an ageing, eccentric, alcoholic scientist. He is spending his declining years in a remote part of France, high in the mountains, persisting in his lifelong passion. That passion is SETI, and he is one of only a very, very few for whom the search of extra-terrestrial life remains important. The rest of humanity are more inward looking, using genetic modification and drugs to explore their inner selves.

Actually, Kelly’s listening equipment is not his only obsession – the other is the love of his life, Terr, with whom he had a passionate, deep relationship in his early twenties before her urge to move on proved too much for her to resist. High up in the mountains he ponders Drake’s Equation, that which is used to estimate the likelihood of intelligent life elsewhere in the universe. He has an encounter/absinthe-fuelled epiphany, when Terr returns, and forces hims to address his obsession.

The second of five stories from Ellen Datlow’s SCI FICTION in this collection, tying F&SF for the the second major source for this volume (Asimovs being the first with 9 stories).

Europa is the setting for this ‘love story’. A new communications technology has enabled virtually instantaneous contact with remote controlled exploration vehicles on the icy moon of Jupiter. To control the vehicles, Earth-bound operators slip into immersion suits and VR goggles and link with the vehicles – something not entirely without risk.

As two vehicles explore the moon, the operators, the elderly irascible Earl, and the slightly younger Rebecca, find themselves growing together. Their doomed love is mirrored by their far-distant vehicles, for whom there are risks and dangers.

Dan Simmons. On K2 with Kanakaredes
Originally in Redshift

I read this story earlier in the year, in Robert Silverberg’s new addition to the ‘year’s best’ anthology market. Silverberg got his out at the very beginning of the year, primarily by dint of finalising his selection long before the calender year was out!

This is what I said then:

William Sanders. When This World is All on Fire
Originally in Asimovs, Oct/Nov 2001

When reviewing this in its magazine appearance I said:

My comments when reviewing the story last year:

For me a fairly anonymous ‘science thriller’, and her other magazine story this year, chosen by Silverberg in his collection (‘And No Such Things Grow Here’) was another thriller which didn’t really do anything for me. Neither were a patch on her strong story from the previous year – ‘Savior’.

Geoff Ryman. Have not Have.
Originally in F&SF, April 2001

The story sticks in the mind even more vividly than might be the case, as the cover illustration for F&SF that month which was for this story, was outstanding.

One of the few stories in this collection which I hadn’t read last year. I have just finished reading Di Filippo’s excellent A Year in Linear City, which is a shoo-in for next year’s Dozois’ collection, so was ready for some classy short SF. And of course the author delivers.

A 1950’s group of hot-rod racers are joined by a very strange couple in a very strange car. The car is something out of this world, the driver is olive green and speaks in a most peculiar manner, and his girlfried is an ultra-stacked babe, albeit mute (Di Filippo does like to feature the more pneumatic type of female in his stories).

All goes well until the alien hot-rod cracks a fuel cell, and whilst the driver head off to pick up a replacement, his girl picks up the protagonist. Honour has to be seen to be done, and a game of ‘chicken’, which the two speed merchants head into the sun, takes place.

Reynolds put together a strong sequence of short stories in recent years, before turning his spare time to writing extremely long, and extremely good novels. When reviewing this story, I wrote:

Allen M Steele, The Days Between
Originally in Asimovs, March 2001

My first divergence in opinion with Gardner Dozois. When this story appeared I got my teeth into it and wrote:

Other stories have subsequently appeared in what it transpires is to be a novel, and I have to say that I have been finding them fairly routine SF adventures. To my mind, if you were wanting a story from 2001 which looked at a similar theme – madness in the gulfs between the stars – then Ian Watson’s ‘One of Her Paths’ from F&SF’s Oct/Nov issue is a long way ahead of Steele’s story.

Co written by Waldrop, and with the horse being a wooden one, and the town in question Troy, you would guess with the title that this was one of Waldrop’s more humorous pieces.

There is some humour in there, although slightly mis-placed, in a story in which the siege of Troy is time-slipping with an excavation of the site in the far future, and with a young, blind man at some point in between. A story not particularly different from several time-slip stories, nor different from other stories about the siege of Troy, so for me another stories which doesn’t quite do it for me. I didn’t read many SCI FICTION stories last year, but one I did read was Lucius Shepard’s Aztechs, which I preferred to this (although Shepard’s is of much greater length). On a timeslip-ish kind of theme, a far better story which this anthology would have benefitted from is Richard Wadholm’s subtle ‘From Here You Can See the Sunquists’ (Asimovs Jan 2001).

Again, another divergence in opinion. When I read this last year I wrote:

Probably worth mentioning that I do judge these stories against the highest standards. So, for example, I would point you way back to Dozois’ 6th collection from 1989, to Walter Jon Williams ‘Surfacing’ for a much more intense and inventive tale of deep sea doings.

When reviewing the previous Arnason story, I pointed out that it was a bit unfair to follow such a routine story with a story by the ever-inventive Robert Reed. And Dozois has done the same here, in following the Arnason story with another inventive Reed story of which I said last year:

Interestingly, I enjoyed the story in spite of the fact that the PeanutPress version of that month’s Asimov which I was reading on my PDA didn’t attempt any of the typographic cleverness to indicate the jumping back in time that the story handles so well.

My original words of wisdom:

Older people are rejuvenating themselves, causing societal problems as their not retiring from work is causing career progression problems for generations below them. Also, and often embarassingly, they are trying to regain their youth by hanging out with an even younger generation. An unlikely relationship between a teenage girl and a 70yr old, leads to a new vector opportunity for a virus.

Last year, I pronounced upon this story:

Michael Blumlein. Know How Can Do
Originally in F&SF, Dec 2001

The story starts in Paris, with love in the air. But with a difference. Earth is under the yoke of the Puscha, aliens whose technique for bloodless takeover was to take from humanity the gift of reading.

The story moves to rural Suffolk, with a love affair between Connie, an alien, and an earthwoman, who despite the difference between the races, and the difference in the power of the two, have evidently found love – or at least companionship.

Deceptively simple, but a story which gets its hooks into you.

When it first appeared, I wrote:

Brenda W. Clough. May Be Some Time.
Originally in Analog, April 2001

Dozois finally chooses an Analog story, although not IMHO one of their best. I wrote:

My ‘hmm’ was well-founded, as far as I am concerned, as the follow up did not impress me either!

When I reviewed the story last year I wrote:

As with the Clough story from Analog, there are several Interzone stories I would have chosen ahead of this one.

Ken Macleod. The Human Front.
Originally published as a chapbook by PS Publishing

I read this recently and stated, at some length:

For the majority of the content Dozois and I see eye to eye. I’ve mentioned the exceptions, and to my mind those could have been replaced with one or two more stories from Analog, Interzone and F&SF to give a more even balance to the magazine market . In no particular order, I would have included some of the following in the stead of the stories by Steele, Waldrop, Arnason and Clough :

Interestingly, only a single inclusion from the ‘Redshift’ anthology gives an indication of what Dozois thinks of an anthology which aimed to be ‘influential’. The Robert Silverberg Years’ Best 2001 similarly only included the Dan Simmons story, whereas David G Hartwell went to that particular well on five occassions for his anthology (review to come in a day or two), although to no great effect.

Similarly, ‘Starlight3‘ is only represented by the Maureen F McHugh story, meaning that for the second year running Dozois excludes a well-received Ted Chiang story (‘Hell is the Absence of God’). If this was on the grounds of being fantasy rather than SF, I think I would have stretched the definition of SF to include that story, as I would have done last year for ’72 Letters’.

Harking back to my introduction, one bonus in having got through this year’s collection so quickly is that I may find the time to go back to read one of the as-yet unread earlier ‘Year’s Best’ anthologies!