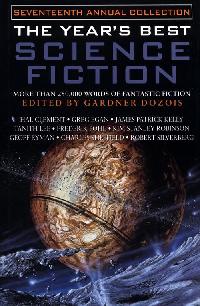 Grandad is very old – he can remember the Angel of the North before it was surrounded by the large oak trees. He reflects on the many changes since his youth, in a very human and haunting take on change.

Far future humanity, with immortality the rule. Amongst those who know of no other way, there is one with a link back to the days of pre-immortality.

The Qur’an has been encoded in such a way that is can be injected into the bloodstream of Muslims.

On their wedding day a couple have a simographer create a sim as a memento of that day. The AIs created are trapped in that snapshot of time, and are rebooted and viewed in the same way that a photograph album is occasionally dusted off and viewed.

Alternate History in which a young boy from the early 1960s comes face to face with a time traveller and gains knowledge of a future which puts him in a position of having to choose to take drastic action.

Transmutations have enabled people to download themselves and retreat to small Nests. Those left behind increasingly resent the elite, and a threat and an opportunity have to be faced by those elite.

A raid by pirates separates Irravel and Markarian, leaving the former with a thirst for revenge that drives to to the furthest reaches of the galaxy, and beyond.

Moon dwellers are eking out an existence, giving their very lives and the precious contents of their body to creating a future for their colony.

Hard science in deep space, with a betrayal, death and revenge bound up with vacuum3.

Karl Schroder. The Dragon of Pripyat.
Originally in : Tesseracts 8

The ruins of Chernobyl hide several secrets, and Gennady finds more than he expects, in several ways, as he investigates the radiation-scarred remnants.

A Heechee story. A planet whose sun is about to supernova offers an opportunity to view in details the inhabitants of the planet. As their warlike activities are watched, the personal lives of those viewing are also subject to change.

North London setting for a three-way relationship in which the paraplegic Ed is the fulcrum.

Sage Walker. Hunting Mother.
Originally in : Not of Woman Born

Genmod cougar prowls the space habitat, honing his hunting skills. He is finally required to fact up to his nature.

Exploration of the Martian mountain goes badly wrong, leaving two men reliant upon each other to get themselves out of their predicament.

Time travel tourism, with punters viewing prehistorical animals in close up. One gets rather too close for comfort, thus resolving a potential time travel paradox.

Robert Silverberg. A Hero of the Empire.
Originally in : Magazine of Fantasy & Science Fiction, Oct/Nov 1999

One of the author’s ‘Roma’ Alternate History series.

Paul J. McAuley. How we lost the moon, a true story by Frank W. Allen.
Originally in : Moon Shots

Experiments on the moon go badly wrong, leading to…

A young woman, raised in by a religious sect with some very strange ideas about women and their role, makes a break from the community through her bio-chemistry skills. She eventually wreaks havoc on the community, and on her relationship with her daughter.

Extremely scary vision of VR, with parents choosing to keep their children perpetually in the oh-so-cute stage.

Another tale from the author’s terraforming Mars milieu. In this a group of old friends reunite against a backdrop of a still frozen Mars.

A journalist is on a planet interviewing an elderly writer. As civil war closes in she flees the city with her lover. Their flight takes them into a jungle and into a very strange situation in which the line between reality and what is being written by the author blurs.

Science has enabled longevity, but for some it is a heavy price to pay – quality of life is not a factor in nursing homes, were years of existence are eked out.

A deep space mission has gone badly wrong. The ‘crew’ are engrams – AIs based on individuals from Earth. Facing evidence abandonment the engrams have gone their separate ways, many living in virtual environments, some essentially offline or at a very slow rate. An opportunity presents itself which causes the engrams to evaluate the nature of their existence.

Temporal experimentation has led to the disappearance of a physicist.

Kage Baker. Son Observe The Time.
Originally in : Asimov’s May 1999

Time travelling agents of the Company are in pre-quake San Francisco, rescuing works of art. A renegade agent shows the darker side of the work of the Company.