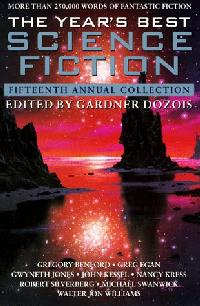 This review is a ‘fix-up’ from story summaries written during 1998.

Espionage on Proteus, and a spy who is deep undercover.

Executive making the max use of the infinite volume of information available realises that the Information Age is about to be replaced.

Greg Egan. Reasons to be Cheerful.
Originally in : Interzone April 1997

A childhood brain cancer and subsequent treatment leaves the protagonist in a deep state of depression. 18 years on surgery which involves placing a prosthesis in the brain gives him the facility to choose exactly what he enjoys, and to what extent.

Bill Johnson. We Will Drink a Fish Together…
Originally in : Asimov’s Science Fiction, May 1997

A bodyguard to an Alien Ambassador travels to Dakota for a family funeral. The Ambassador, Foremost, travels with him, and the pair develop a close understanding.

A highly advanced xeno spaceship wreck conceals a wormhole, through which the aliens evidently made their escape to where/when?

Alastair Reynolds. A Spy in Europa.
Originally in : Interzone June 1997

Espionage on the moon Europa, where a secret lies in the oceans.

William Shakespeare finds himself in the Americas, writing his plays for a somewhat different audience.

A young girl, a musical prodigy due to the gene enhancement her parents opted for, finds herself increasingly plagued by echoes from the other versions of her which could have been created.

David Marusek. Getting to Know You.
Originally in : Future Histories

Wealthy woman visits her sister, living in a subterranean level in an apartment block. She is breaking in an AI domestic servant program, and her sister is a holo-hospicer.

A touring holiday in France loses its charms against a backdrop of industrial unrest, homelessness, and a breaking down of barriers between the sexes.

A jupiter-sized spaceship, thousands of years old and undergoing an infinite journey hosting untold species, turns out to have something more at the core than was believed.

Christopher Marlowe, contemporary of one William Shakespeare, poet/playwright/spy engages in the latter of these to investigate, with extreme prejudice, one Dr Faustus. A frozen Thames and an ice-boat whisk him skiss skiss skiss to a confrontation with…

Explorers/mountaineers on Mercury find that their journey becomes a more fundamental exploration of self.

Galena Pittman flies into North Dakota, in search of her lesbian partner. Thea is in the mountains engaging in landscape art, with others, some of whom are more other than usual.
Published online as a classic reprint by Lightspeed Magazine in 2011 : http://www.lightspeedmagazine.com/fiction/frost-painting/

Ian R. MacLeod. Nevermore.
Originally in : Dying For It

Gustav, the artist, loses Elanore twice, in order to continue painting. The second Elanore was a ghost – a computer-held persona, indistiguishable from the orginal.

A VR addict dies in an isolation tank, evidently a suicide. But did her suicide also meet the needs of the couple nearby?

The protagonist searches for his estranged sister. She has reinvented herself with a completely new family history and personality.

John Kessel. Gulliver at Home.
Originally in : The Pure Product

Whilst Lemuel Gulliver is off on his travels, his wife and family have more mundane concerns.

Explorers on Mars stumble on a form of life under the planet’s crust. Leaving for Earth they catch a glimpse of a message from the planet.