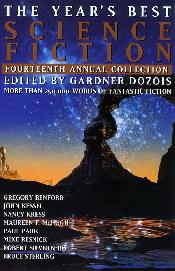 This review has been put together from story summaries written during 1997.

Two scientists travel to Africa for a holiday, including time spent in ‘immersion tanks’ where they are patched into the minds of chimpanzees in the nearby game park.

Zombies look set to become the cheapest of cheap labor, with a major impact on the living.

Aulit Prison holds those whose actions show that they can not be part of the shared illusion that is reality. But the prison holds a man who has the answer to Pek Bengarin’s questions about her sister.

A soldier from a war that has been/will be fought in the far, far future comes back home, but finds that the war follows him. An excellent story.

A pile of old SF magazines in the attic lead to..

Sailing in the gas-clouds of Jupiter.

John Kessel. The Miracle of Ivar Avenue.
Originally in : Intersections

Talent scout from the future is a key player in a complex thriller – not so much a whodunit, but a whodidtheydoitto.

Published online as a classic reprint by Lightspeed Magazine in June 2011 : http://www.lightspeedmagazine.com/fiction/recording-angel/

A marriage with a wide age gap between the partners – not unknown when mortality lasts several hundred years. But when the junior partner is one of the very few who does suffer from the ageing process…

Jim Cowan The Spade of Reason.
Originally in : Century 4

Caxton, spelt with a 6 in the middle, is about to leave psychiatric hospital following a lifetime obsession with messages hidden in numbers.

Maureen F. McHugh. The Cost to be Wise.
Originally in : Starlight 1

A young girl in a remote settlement which is vistited by offworlders then a group of murderous brigands.

Gregory Feeley. The Weighing of Air.
Originally in : Starlight 1

In Delft, some centuries past, scientific discoveries follow from the development of microscope lenses.

Michael Cassutt. The Longer Voyage.
Originally in : The Magazine of Fantasy and Science Fiction, July 1996.

Hopefully the last in the Kirinyaga series.

A generation-ship discovers life on a planet that is anomalous.

Steven Utley. The Wind Over The World.
Originally in : Asimov’s Science Fiction, October/November 1996

Scientists travelling back to prehistoric times lose one of their number en route.

Scenes from a lengthy life that are linked to the space program. Same theme as the author’s ‘In Saturn Time’.

Jonathan Lethem. How We Got in Town and Out Again.
Originally in : Asimov’s Science Fiction, September 1996.

Pre Great War romance, with a doctor treating a most unusual case.

Set up by the program, Daniel Ng undergoes a passage into the afterlife.

Stephen Baxter. In the MSOB.
Originally in : Interzone, March 1996.

Drilling deep into the Earth’s core against a backdrop of major change.

One of the first indistinguishable from human robots meets up with one of those who helped create him. She has been on the run for some time and their short lived relationship is doomed.