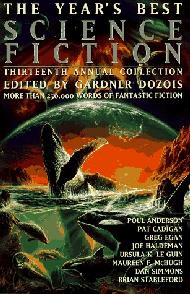 These story summaries were written c1996 and have been brought together for this review in August 2002.

A Hainish story in which Shomeke starts from very humble origins as a slave on a farm, but the future opens up many more options for her.

Robert Reed. A Place with Shade.
Originally in : The Magazine of Fantasy and Science Fiction, April 1995.

A terraforming contract on a large scale offers a peculiar set of challenges.

Massive computing power is used to probe mathematical certainties. And if 2+2 does not equal 4, then what does that mean for the fabric of the universe? Maths was never this much fun at school.

Michael F. Flynn. The Promise of God.
Originally in : The Magazine of Fantasy & Science Fiction, March 1995.

A male werewitch is brought to the peak of his powers through a female rixler. But even his powers are not able to save her. Or him.

Hi-tech whodunit in a VR setting where the stakes are high.

Far Future sculpture competition on Earth. In the war with the Fwndyri, the planet has been reduced by nanophages to little more than dust. Worse is to come, and the narrator’s affair with White Hill is challenged by the one possible means of escape.

Future Hollywood moguls raid moment-universes (alternate worlds/multiverses) for stars for their movies. No prizes for guessing who the star in question is in this story.

A comic book hero manages to go out in grand style.

Abe Lincoln survives the assassination attempt (just). What is described is presumably alternate history, although my knowledge of the American Civil War isn’t such that where this harrowing tale of forced relocation of slave-owning families deviates from reality.

David Marusek. We Were Out of Our Minds With Joy.
Originally in : Asimov’s Science Fiction, November 1995.

Far future with virtual immortality, and personal AI butlers dealing with communication. An artist and politician are lucky to be given the opportunity for a baby, but the putative father falls foul of some very nasty surveillance, and comes out a changed character.

Very spooky scary – the kind of story Stephen King would have written in his heyday. A ghost avoids falling off the world, where the rules of gravity are reversed, but he has to evade his nemesis.

Paolo Venetti is cloned a thousand times and sent out exploring for life-supporting planets. One of his clones comes across a planet with tile-like ‘intelligent life’.

Lesbian lurve, with estranged partners, one seeking something through kite flying as art.

An alcoholic teacher is reunited with an ex-pupil, who chases him across different landscapes and timescapes.

Dino-like aliens, the Hanen, have the technology to encode individuals and transmit them vast distances as superluminal signals. Kamala Shastri is transmitted, but not without problems. And the resolution of that problem is a major challenge to the human who is involved in the transmission of those signals – new ways need new ways of thinking.

Sov is approaching her kemmerday – her coming of age. In the kemmerhouse she undergoes an awakening/transformation.

A teacher struggles with the ability to see the ideal person behind the actual person (literally).

An old man living in a very brutalised society made bearable only by the ability to spend a lot of time in a more ideal world.

Terry Bisson. There Are No Dead.
Originally in : Omni, January 1995.

An idyllic summer day, but such days cannot last forever, and children grow up, and can never return?

Set in the author’s ‘Confluence’ milieu – an archivist has to record the impact of a stranger on the city.

A native American game of chance.

A classy far future history told through the eyes and writing of an emortal, who studies humanity’s attitudes to death over the millenia.