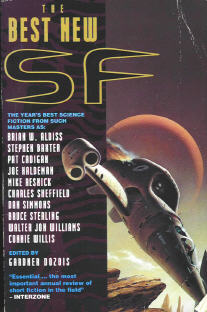 Sensitive story about longevity and the effect of wider generation gaps. A centenerian (and more) is visited by his grandchildren.

The tables have been turned on the British Empire, with the U.K. little more than an Industrial Archaelogy Theme Park. An Indian film-crew are shooting a number of films on location.

Bioenhanced ballet dancers and a dog with the mind of a five-year old child.

Don Webb. A visit to the Farside.
Originally in : Amazing Stories, April 1993.

An Alternate Future History – the Cold War and the Space Race continued, with the Soviets finishing on top. A Romeo/Juliet scenario is acted out with a similarly tragic ending.

One of a number of recently-arrived aliens settles in a remote Appalachian community and attempts to set up an illicit still.

Burnell, attempting to recover from having significant portions of his memory stolen (in FOAM) finds himself in Turkmenistan on the track of one portion.

Hard SF at its best (ie some interpersonal conflicts etc.). A team of explorers are in the subterranean (sub-Mirandan?) caves of Miranda, a Uranian moon. A ‘quake seals them in, leaving a difficult journey to the surface.

Alternate History, with Tanzanian President Nyerere taking up Amin’s offer of settling their war in the boxing ring.

Robert Reed. The Guest of Honor.
Originally in : The Magazine of Fantasy and Science Fiction, June 1993

Deep-space explorers, made up of an amalgam of minds, return to have their lives terminated and their memories returned to the original owners.

Satire on the excesses of tabloid Sex with Aliens! stories

Deep in the steamy nano-engineered rainforest, a drug has been developed with allows DIY neurosurgery, enabling radical genetic self-modification.

Parts of Babbage’s Difference Machine turn up in New Zealand, as do pointers to a discovery made in the previous century. 1994 Hugo, Best Novelette.

Cush is the Second Coming, and takes on all the sins of the world, becoming in the process ….

Mark Rich. On the Collection of Humans.
Originally in : Nova 5.

Steven Utley. There and Then.
Originally in : Asimov’s Science Fiction, November 1993

A scientific research station in the pre-history of the Earth faces the prospect of future abuse of this opportunity by Big Business.

Jack Cady. The Night We Buried Road Dog.
Originally in : The Magazine of Fantasy and Science Fiction, January 1993

Supernatural story about cars and the long-dead twin who became Road Dog.

An artist specialising in painting in tandem with non-artists.

Far Future. A young girl is bio-engineered to grow extremely rapidly and to take a key role in understanding the Sun.

The USA is struggling with a population hooked on drugs which allow perfect recall of past events.

William Browning Spencer. A Child’s Christmas in Florida.
Originally in : The Return of Count Electric and Other Stories (Permanent Press)

A family celebrate Christmas Day in a somehwat off-beat way.

A new virus is spreading across the globe. Most victims die, but some appear to be somewhat different after contracting it.

Alternate History. Rather aimless and rambling story involving Mary and Percy Bysse Shelley and other bods shortly after the Battle of Waterloo.