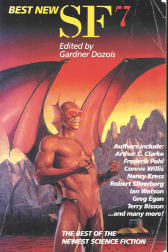 The story summaries below were written sometime between 1993 and 1997, and were read in the UK pbk edition.

Trouble on the moon! Gunther (Bruce Willis if they ever film it) and frigid Russian ice-maiden (Brigitte Nielson) come together to solve the problems on a micro- and macro-level.

An extremely well written piece of storytelling, focussing on the relationships between and across generations of female members of a family. The biological issue in question, and the opportunity to have a choice in the matter, is the fulcrum upon which the story balances. 1993 Hugo, Best Short Story.

The Chinese discover the Americas first.

The protagonist repeatedly attempts to program himself into a supercomputer in an attempt to create a version of him which is unaware that it is not the real thing.

Romantic comedy. Two guys from the future travel back to save works of art otherwise destined to be lost.

Medical services become increasingly difficult for the underprivileged to obtain. Lateral thinking on their part helps to solve the problem.

Ian Watson. The coming of Vertumnus.
Originally in : Interzone, February 1992.

Jill Donaldson, art critic, gets involved with some erotica of very dubious pedigree.

Robert Silverberg. A long night’s vigil at the temple.
Originally in : After the King (Tor).

A man of the faith is confronted with evidence that the whole basis on which his faith is based is erroneous. Does he share this information or suppress it? The Gods of the faith are extra-terrestrials.

Novel outline. Publication of which could only have been justified posthumously.

A world in which puberty arrives very, very suddenly and with all the trauma (physical, mental) of childbirth, and with one or two little quirks.

Joe Haldeman. Graves.
Originally in : The Magazine of Fantasy and Science Fiction, October/November 1992.

Time traveller goes back to Martinique 1902 for the eruption of Mount Pelee.

Particle accelerator creates a singularity, despite warnings from female scientist.

Trailer park family – foetus in a bottle, dad wired up to any amount of medical stuff keeping him half-alive, and two babes.

Six years ago every AI supercomputer took control of its own, and humanity’s destiny. On the anniversary of this event, computer-generated celebrations take place.

Young woman confronts her absent father and her family trait.

Cyberpunk, although as it is Elvis, perhaps Cyberrock’n’roll. Thang’you very much.

Bradley Denton. The Territory.
Originally in : The Magazine of Fantasy and Science Fiction, July 1992.

Sam Clemens rides with Quantrill in the American Civil War. Alternate History – bit difficult if you are British and not altogether sure of the key players and battlegrounds etc.

Ian McDonald. The Best and the Rest of James Joyce.
Originally in : Interzone April 1992.

A series of alternate histories, or rather, alternate biographies of James Joyce, spanning encounters with Jung, a Great War that did not finish in 1918, First Contact…

Best story in the collection. Bittersweet story of a young girl with a very mysterious background, who with the help of the protagonist manages at first to escape the CIA’s clutches. In the end she does finally, after a fashion, do so.

John Lennon, like, but with him having left the Beatles long before they became the Fab Four. Groovy.

Kathe Koja. By the Mirror of my Youth.
Originally in : Universe 2 (Bantam)

Raymond is replacing his wife, Rachel, with a younger woman. A younger Rachel, in fact. But both versions fight back in their different ways.

Rafiel is one of many chronologically aged, though still virile and youthful in appearance, in an overcrowded, near-immortal world. In a thoroughly vacuous, pretentious society, he finally leaves the planet when faced with his own mortality.