I came across a review of ‘X’ at The Royal Court Theatre in London, and decided to check it out. It’s coming towards the end of it’s short run so head over to the Royal Court’s website to book tickets.

It’s not very often you get a fully sfnal play on the stage in London, although that may be only true of the big plays, as a previous play by the writer Alistair McDowall (“..27.. one of the most distinctive new voices in British writing..”) featured a time machine, and a previous play was ‘Captain Amazing’. Turns out that McDowall was from the same gritty part of the north east of England as me, close to where the oil refinery whose night-time display inspired another local lad, Ridley Scott, for his opening nighttime cityscape intro to ‘Blade Runner’.

However, I digress, so on with the review (which will include spoilers).

I hadn’t been to the Royal Court Theatre before. It’s next to Sloane Square tube station, so it’s not part of the West End. It appears the Theatre has a couple of stages, and ‘X’ is in the Jerwood Theatre Downstairs. It’s an amazing setting – it’s a traditional London theatre, only on a much smaller scale, and subterranean. The balcony is on ground level, and you descend to get to the stalls. Inside it has the proper layout and styling you would expect from a London theatre. There’s also, a further level down, a restaurant and bar, that was busy (and noisy).

There are twelve rows of seats in the stalls, holding about 150 people, and we were in row F, which was very close to the stage. (People in Row A were in touching distance of the stage, and probably in spittle distance as well).

The staging was relatively minimal. Set on a space station our in Pluto orbit, there’s a tall, square room, which is the sole location. The play starts with a table and chairs, small kitchen and cupboards (and gradually becomes emptier..) 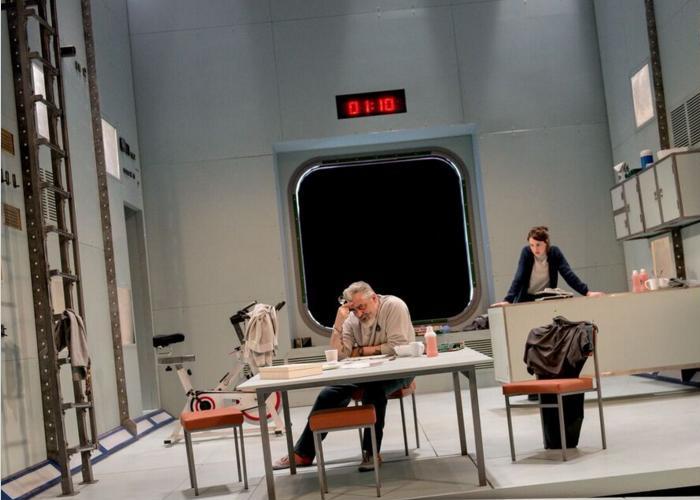 There’s a door bottom stage left, and mid-stage right, and a set of ladders going up to an entry hatch mid-stage left. There’s a square viewing window at the back of the stage, which shows the blackness of space – no stars, no Pluto, nothing… The front of the stage is slightly off-kilter, given an slightly disorientating appearance. (If only the budget and space could have allowed that to rotate, to give an impression of a rotating space-station).

Cast-wise, the lead is Jessica Raine, most known for a lead in the TV drama ‘Call the Midwife’, where she plays a 1950s/1960s midwife. Here she is able to give full rein to her emotions as Gilda, as do the other cast members. Darrell D’Silva, plays Ray, the ship’s captain, and shows his Shakespearian credentials and experience and the good set of lungs the Bard often requires. Rudi Dharmalingam as aloof Cole, and James Harkness as the very Scottish Clark, and Ria Zmitrowicz as Mattie, complete the crew complement.

In terms of SF, the play is more Lem’s ‘Solaris’/Kubrick’s ‘2001’/Duncan Jones ‘Moon’ than it is Star Trek/Star Wars. And it’s a challenge to watch. In a good way. 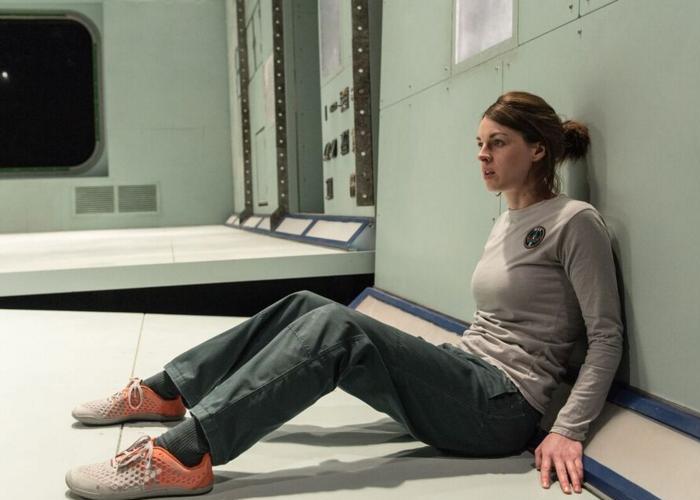 The scene is set early : a research base is orbiting Pluto, and communication with Earth has ceased. This has happened before, but notice was given, and it was due to maintenance of equipment. This time, there was no notice, and the amount of time that has passed since communication was lost is a moot point… Ship’s captain Ray bluffs his way around the subject, whilst Gilda is clearly very close to breaking point.

After that things get a bit strange. Scenes are separated by the theatre going into complete darkness and a quick bit characters and scenery moving place. The second scene features a big red cross on the inside of the viewport, and Gilda is asking Clark, in her role as captain (what happened to Ray??), to carry out her request to clean it. There’s a discussion around just how long it is since she made that request, and it’s clear that more time has past since the first scene, and communication with Earth has been lost for much longer.

The first half of the play continues which several short scenes, in which we find out more and more about Earth (it’s really gone to shit). Ray re-appears, talking fondly about his love for the now-lost birds of Earth, and playing his bird-whistles.

More about Earth, and the crew is teased out, until there’s a big reveal towards the end of the first half and we find out that there is clearly something wrong with the ship’s time-keeping, and time is passing in a non-standard way, and in fact the scenes we have been watching haven’t been in chronological order. This becomes clear when we see Ray, who himself has been having stress-related issues, cuts his own throat and smears a big X on the viewport window having seen a young girl with an X across her mouth crawl out of a cupboard.

It get’s creepier in the second half, as time and much more start to unravel. We see Ray follow a little bird as it flies out of a door and up through the access hatch in the roof (how did they do that?). Then the number of crew members becomes an issue – both the number who are left after death has taken it’s toll and just how many there were to start with. And what roles they had. And who said what to whom. And when.

The final quarter becomes increasingly staccato in terms of scene length, dialogue, as much more is revealed (but no answers are given). As we are left with Gilda and Clark, the latter bemoans his fate, announcing that he thought that he was the main character.

And it gets very weird in the end. A six foot long dead bird appearing after a momentary blackout between scenes was pretty impressive. And in the end we are left with Gilda, and her daughter(s), and lots and lots of questions. No answers, but this wasn’t Star Trek/Star Wars. It was a clever piece of writing, great acting and direction, and cheap tickets as well.