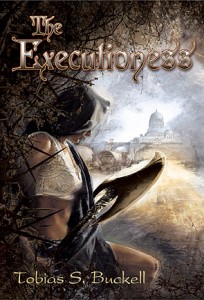 A companion story to Paolo Bacigalupi’s ‘The Alchemist’ (review), in hardback dustjacketed loveliness.

The shared world of the two stories is one where the use of magic encourages the growth of a pernicious bramble with a fatally venomous touch. Bacigalupi’s story featured an alchemist who discovers a way to destroy the bramble, but whose invention is used in an altogether different way, albeit with the same effect.

And here, Buckell looks at a conflict caused by the bramble – a community ravaged by religious zealots who feel it is a sacred duty to kill or enslave those who use magic, to get them to see the true Way. Buckell’s protagonist is, as you would guess, an Executioness. There’s a lot packed into less than 100 pages, as the middle aged mother only takes on the mantle of village Executioness from her dying father in the first pages, and on her first day of duty has her village attacked, and children kidnapped.

The story follows her as following an ill-fated encounter with a group from the raiding party, a myth about her quickly springs up. Joining a caravan wending its way across country, she is taught to fight, shows that she has learnt well in one encounter, and then in a matter of pages is leading a huge army of widows to besiege the stronghold of raiders.

I was minded of Mary Gentle’s ‘Ash’ – a book of considerably larger dimensions, featuring a female who takes on a leading military role. For full justice to be done to his story, Buckell would need two or three times the length he had available, with the result that the story zips along rather too quickly – there isn’t that much in a lot of the story to make the setting stand out as anything other than a bog-standard fantasy setting, although that space is on the other hand spent usefully discussing

Good though to see a middle-aged woman in a lead role, and an army put together of similar women, although slightly jarring to have the cover and interior illustrations of an altogether younger and foxier woman!

And on a final note, with reference to another of Mary Gentle’s characters, I can safely say that The Executioness is my second-favourite chopper-wielding fantasy female with fighting skills. A prize for the first of you to comment below with the name of that character.