Tobias S. Buckell. A Jar of Goodwill. (Clarkesworld Magazine May 2010). 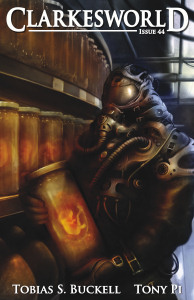 SPOILER ALERT. Don’t read the review until you have read the story – here.

Buckell explores issues that are the top of the list for me with regard to SF – what sacrifices will we have to make as individuals, and as a species, to make it out beyond our solar system? How will we maintain our essential humanity?

Alex Mosette is working on an orbiting space station, right at the very lowest level – struggling with oxygen debt and paying his keep. He’s in no real position to turn down an opportunity that is offered – to act as a ‘Friend’ on a year-long contract on a spaceship that has recently docked. Taking up his post, the three human scientists he joins, the neutered ‘drone’ who arrives from the home system’s asteroid belt, feeling the absence of the hive mind he is part of, and the alien race under whose thumb humanity is due to our (unintentionially) infringing their patents with our own discoveries, all set the stage for an exploration of these issues.

Alex has to make a decision – whether to side with the scientists who are willing to eradicate an intelligent species they have found on another, in order to be able to patent some that race’s scientific discoveries, and use those patents to get ourselves from under the yoke of alien oppression that we are under.

The story complements that of Jay Lake’s ‘Torquing Vacuum’ from Clarkesworld a couple of issues ago, although it doesn’t quite match Lake’s inventiveness. However, as with the Lake story, I’d be more than keen to see the setting of Buckell’s explored at greater length and depth (subtle hint to Sheila Williams at Asimovs…).