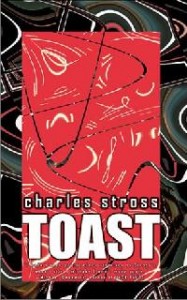 I don’t as a rule read many single-author collections, for no reason other than I prefer reading collections by different authors on the basis of the old adage that variety is the spice of life.

But I made an exception for this collection on the basis that I have particularly enjoyed the recent Stross stories from Asimovs, Spectrum SF and Interzone, and there are several stories in this collection which I haven’t read.

scroll down and read on..

Introduction: After the future imploded.

The several pages of introduction give an insight into themes which appear throughout many of the stories, particulary that of Moore’s Law which identifies the short timescale over which technology doubles in power. Project that technological growth rate over the next few years and decades and you have the essence of Stross.

When I first read this I wrote

The story is worth a re-read. That rate of technological growth is a hub of the story, with this Earth being one (out of many) where processing power is able to achieve singularity : an all-consuming AI. The protagonists have been monitoring this Earth timeline, trying to prevent this event, and have to flee as the all-seeing AI reacts to them.

When I first reviewed this I commented that the story was somewhat spoilt by the concluding pun. On re-reading the story in the light of Stross’s more recent work it comes across clearly as an early work. There is a interest idea, with an information trader having been caught out by the market, struggling to work his way through a new identity which appears to have been forced on him. Rather than exploring this fully, the story concludes quickly with the aforemention fun.

Extracts from the Club Diary.
Originally in : Odyssey 3, 1998

A neat diary entry sequence based on the premise that a select, secretive gentlemen’s club in 19th century England is one established for the consumption of …. coffee.

As with the previous stories I was keen to re-read the story, and again felt the eldritch shivers down the back of my neck. The chilling ending is a classic.

An affectionate conference report – the conference in question being one some years hence, which is a retro-computing conference, and which can be seen to map out the ground for the current Manfred Macx stories. Knowledge of the IT industry will (or lack of it) will impact on how much you get out of the story.

A Boy and His God.

Originally in : Odyssey 1, 1997
Cthulhu is a feature of several stories of Stross. In this one he has fun with a near-future secular society – lack of faith has meant that the gods in question are reduced to the status of family pets. A young boy gets a sufficiently eldritch monster for it to be a kewl pet – but teenage hormones being what they are, the opposite sex offers more to the boy than the friendship of his icky companion.

One of the earlier stories in the collection, with Stross raising the spectre of Y2K. As an IT journalist the bogus panic spread by the IT industry is something he is familiar with. In this story a ship of non-digitally equipped individuals have a New Year’s Eve cruise with the intention of avoiding any Y2K rollover problems. But they find that the Millenium has another trick up its sleeve.

Dechlorinating the Moderator.
Originally in : Interzone 101, 1996.

Pre-dating the TOAST con report, here we have a further future conference in which humanity is truly becoming one with technology.

The earliest story in the collection. A near-future drug trafficker uses his financial resources to travel back in time, intending to flood the market with his drugs. Unfortunately, he goes back to an alternate past in which drugs have been decriminalised and which leaves him nothing to sell.

Orwell’s 1984 is revisited, with an altogether too believable near future England ruled over by a regime that is not a million miles from the current Blair regime. Strange that people thought that having Margaret Thatcher as Prime Minister in 1984 was appropriate to the Orwellian nightmare, whereas it is a (nominally) left-wing government which is threating all manner of civil liberty and data collection nonsense.

A protagonist finds himself getting inside the very inner circle…

An excellent collection of stories. Little in the way of the standard SF tropes – all near-future tales showing an at times pessimistic view of where we are heading as a race and what that will mean for humanity as a whole and individuals on a personal level. Excellent writing and with only two or three exceptions, SF of the highest order.

Subsequent to these stories there have been the linked series of well-received stories in Asimovs (read Lobsters here), a novel serialised in the (sadly) increasingly sporadic Spectrum SF, and a novel due in 2003.