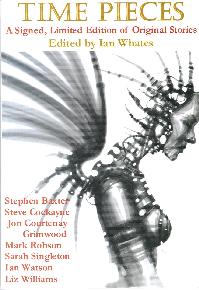 ‘Time Pieces’ is a slim volume, containing eight shorter stories by some well-established names, commemorating NewCon3, a convention held in Northampton in October 2005, at which they (but not as many fans as had been hoped) were present.

The volume gets off to a good start with the opening paragraph of this story, a well-crafted piece of writing which sets up an intriguing mystery, of a strange tower reputed to be in the distant woods, one not made by men, but which mysteriously appeared, as if fallen from the sky…

span style=”font-family: tahoma,arial,helvetica;”>These are strange times, as the winter has remained, even though the month is June, and a young village boy stumbles upon a knight in the woods, seeking Caer Cold, and the boy decides to follow him. Williams handles the short story very well, managing to set the scene and the broader backdrop with a minimum of words, sketching it out, rather than laboriously filling in too much detail. It’s an appetite-whetter, the only downside being the frustration that the reader has had a glimpse of a fragment of a much longer story. It appears that there is another story in the same setting ‘Debatable Lands’ due in Asimovs at some point. I’ll be watching out for it.

Not being much of a novel reader, I’ve only been aware at one remove of Grimwood, whose novels have garnered a lot of praise. I’ve got 14 years til my local government pension becomes available, so I won’t have the time to remedy that deficiency until 2020 at the earliest, but at least this story doubles the number of works of Grimwood I’ve read.

Again, as with all the stories, it’s a shorter story, which necessitates the bare minimum of background and characterisation. Two short strands are woven together, in a near future Northampton when a lucky number are travelling forward in time to beyond the imminent ice age. A young man with a lot to lose, and a young woman from a poorer background conspire to take the trip together.

A journalist is surprised when an attractive woman who claims to know his scientist friend turns up, with a murky tale of scientific experiments and the Powers That Be. It appears that the scientist has created a small time travel machine, which is of interest to certain authorities, but he has gone AWOL. Can the journalist help?

Intrigued,the journalist takes the machine and the notes his friend had made. Should he do as requested, and experiment with travelling back in time just a couple of hours ago?

Ian Watson. The Globe of the Genius.

A very clever glimpse into the mind of a mathematic obsessive – probably too clever a glimpse it has to be said as Watson appears to very clearly empathise with the autistic spectrum disorder worldview of most math geniuses. The genius in this story starts with discussing Fermat’s Last Theorem, and takes up the intellectual cudgel of winning a prize for another FLT – Faster Than Light Travel – with the help of an erstwhile fellow competitor.

The first published story by Cockayne, in which a group of travelling minstrels in a pub turn out to have travelled further than might have been expected. And in following them to their overnight campsite, one local man return to his own time with an unwelcome memento of his visit to their bucolic times.

A light and deft touch from Baxter, providing a tongue in cheek view of British civil service at its best, as one Piers Percy-ffitch finds his daily routine upset by a man who wishes his paranomal abilities to be of service to Her Majesty’s government. Where there is chaos, he can bring order.

Another first published story by a writer with novels to his name. The website for his Dreamweaver series states “The Darkweaver Legacy will eventually be a series of four fantasy books that are easy-to-read, swords and sorcery style adventures for anyone with a reading age of 11+” which I can safely state that I wouldn’t read should I live to be 200. The story in hand does rather suffer in comparison to being read after stories written by experienced and consummate writers of short SF/fantasy stories for adults. A thief with a chalice stolen to order is surprised to find out it is a fake, but not as surprised as his client, who finds the thief is just as fake.

Editor Whates provides a more traditional time travel story, in which military forces from the future take regular jaunts back in time to make changes to the past. However, their work is often sabotaged by other, mysterious forces which oppose them. And for the seasoned reader, it of course comes as no suprise to find out the identities of the saboteurs.

The address was of course delivered through the safe hands of one Ian Watson.

For me the picks are from the authors with the more established track record at short length: Williams, Singleton, Watson and Baxter. A nice front cover from artist Fangorn (aka Chris Baker). At less than 100 pages you’ll get more bang for your buck from other original anthologies this year in terms of content, but they won’t be signed, limited editions, will they? (It’s probably the cheapest way of getting a book signed by Stephen Baxter you’ll find!)

Praise to Whates for putting in the effort to produce this volume. It’s not going to make his fortune, but it is going to mark for posterity an event that would otherwise just be one of many small SF cons that take place each year.