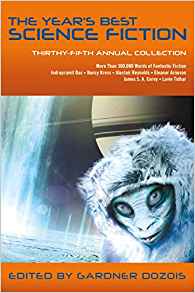 After reading SF up to my mid-teens, I didn’t read much for a decade or so, and it was picking up, by chance, a UK edition of one of the mid-1980s Dozois anthologies that got me into reading short SF, and I haven’t looked back since. I only had a few short email exchanges with Gardner over the years, but I do remember that when I posted on the site way back in 2002 that my father had died, Gardner made the effort to send an email expressing his condolences, and that touched me, and was I feel a mark of the man.

The volume arrived today (Mon 13th August 2018). Here are the contents, and I will insert story reviews of the following weeks and months as I savour the volume. The only silver lining to the this last volume cloud, is that my plan is to go back to Volume 1, and make my way through all 35 volumes, reading those stories I haven’t yet read, and those I want to read again. Watch this space. (Well, not *this* space, but some space on the home page).

Indrapramit Das. The Moon Is Not a Battlefield.
Originally in : Infinity Wars (ed Strahan, Solaris 2017).

A strong opening to the volume, a thoughtful and powerful reflection by a retired Indian lunar combat soldier – reflections on childhood life in the slums of India, decades spent as a combat soldier on the moon, and retirement slightly closer back to Earth. Bother internal and personal, and outward looking. Full Best SF review here.

R.S.Benedict. My English Name.
Originally in: The Magazine of Fantasy and Science Fiction, May/June 2017.

An ‘interesting’ choice from Dozois, as I’d put this story clearly into the horror genre, or, failing that, fantasy. A well-told story, but not SF. The narrator is a creature who does not know it’s own origins, but what it does know is how to inhabit the bodies of humans and pass themselves off as human. We find out quite a bit of the icky bits around getting into a body (it’s not mind-transfer, it’s actually getting -in- the body), and the tricky bits about maintaining the body and maintaining the facade of being the human whose body they are inside. The current guise for the creature is that of a Brit who is teaching English as a Foreign Language in the Far East, who finds him/itself surprisingly close to another man. The climax in an ambulance beats the Hannibal Lecter/Sgt. Pembry ambulance scene, hands down.

Also chosen by Neil Clarke in his anthology of this year’s best, where I read it and enjoyed it, noting lots of action, but plenty of dialogue and back story to make it a rounded read.

As with the opening story in the volume, this fourth one is also a reflective one, which will similarly disappoint seekers of action-driven adventure, but the geo-political background and the other detail in it make it much, much more than, say, a story about an EVA going wrong and the astronaut having to save themselves. Full Best SF review here.

Oh for the days when I was reading several stories a year from Swanwick! This is a short, thoughtful story which oozes class and what a setting! Full Best SF review here.

Also chosen by Neil Clarke this year, and I enjoyed it, with one quibble.

Kelly Robson. We Who Live in the Heart.
Originally published in : Clarkesworld, May 2017.

Also chosen by Neil Clarke this year, and I reckoned the setting was a real doozy, and enjoyed the story.

Also chosen by Rich Horton in his take on the year’s best SF&F. A couple meet once a year for a few weeks, able to substantiate in body ‘blanks’. They are the wealthy, privileged ones, and there is resistance to them from many in the community.

Once again, a story that you can recognise as one from Kress, featuring a well-rounded, working class female protagonist. Three dimensional and believable. Full review here.

A crippled ship, a Big Unidentified Thing in deep space, treachery and more. All clever stuff, although admittedly the characters are rather one-dimensional, with one of them handily having prior knowledge that helps explain the background. Full review here.

Aliette de Bodard. The Dragon That Flew Out of the Sun.
Originally in : Cosmic Powers (ed Adams, Saga Press, 2017)

In AdeB’s ‘Xuya’ sequence, a ‘story’ which looks at the causes behind a stellar conflict, through the eyes of a young girl, who realises that the story about their planet’s demise that her mother told her as a young child is just that. It’s quite short and TBH is a bit too much ‘tell’ and not enough ‘show’. Alastair Reynolds would have made a big fat novel out of this!

Naomi Kritzer. Waiting Out the End of the World at Patty’s Place Cafe.
Originally in : Clarkesworld, March 2017. Still online here.

Whilst not SF, altogether a good story about grownups and grownup issues. Best SF Review here.

An intriguing vignette from the authors known as Corey. Best SF review here.

A story that really didn’t grab me. A digital kill is about to take place, the assassin a persona in an online world, who is taking out a character beloved of many who spend their time behind glasses in that world. It turns out that the person who is the online killer is in real life being tracked by two others who have designs on her. There’s not a whole lot of depth to it, the action isn’t particulary wowza, and it’s a setting that’s been visited many times before.

I liked the opening pages of this longer story, introducing an intriguing female protagonist with a back story and dodgy family to match but rather lost interest as a routine heist caper unfolded. Full Best SF review here.

Lavie Tidhar. The Road to the Sea.
Originally in : Sunvault : stories of Solarpunk and Eco-Speculation.

Also chosen by Neil Clarke and I noted this was an excellent, well-written story.

A touching story, with a very strong sense of place, and of the people populating it. Full Best SF review here

Very much in the ‘Analog’ vein, of scientists coming across a scientific challenge/conundrum and having to resolve it. Best SF Review here.

Also chosen by Neil Clarke in his take on the Year’s Best, and I noted it was a clever story.

Steampunk story in which a female scientist challenges the dominant patriarchal scientific community.

Sensitive First Contact story from Kress, with a focus on the interpersonal relationships amongst the crew, and an intriguing take on the alien life they find (small deep-sea eel-like creatures, who it transpires are clearly away that their planet is drifting away from their sun and their future is bleak).

Kelly Jennings. The History of the Invasion Told in Five Dogs.
Originally in : The Magazine of Fantasy and Science Fiction, May/June 2017.

Near-future post-Shit scenario, with five vignettes (one a teeny morsel) with canine elements.

Truth be told I baled out of this story which didn’t seem to sit well amongst the stories read so far. The setting, near-future Mexico City was described well, but I found the narrative rather weak and more like a very average US TV drama or soap opera.

A shorter story, in a near future in which not only mammoth but also other extinct members of the human family (neanderthal) have been brought back to life, along with hybrids. The story, what there is of it, looks at what it is to be human, and what it is to be part of a small community apart from the whole.

An ex-soldier living on a planet falls, against her better judgment, for another ex-soldier. Humanity has fucked up Earth, and the planet on which they are living is out of communication contact with Earth, although FTL vessels continue to arrive. There is a low-level, hi-tech war going on between the two groups of settlers as a background. The story is fine as far as it goes, but perhaps is missing that little bit extra to lift it beyond being more than a reasonable military SF story.

Rich Larson. There Used to Be Olive Trees.
Originally in : The Magazine of Fantasy and Science Fiction, January/February 2017.

I read this in it’s magazine appearance, and enjoyed it notwithstanding the teen tugging and frotting.

The editorial intro did this story a dis-service, as the description of what the story was about (why not let the reader find out??) led me to remember one of my all-time favourite SF stories, James Tiptree Jr’s ‘The Man Who Walked Home’. Any story would struggle to live up to *that* classic, and Johnson’s story started well but gradually slipped away from me. The protagonist’s internal exchanges with his AI didn’t really work for me, and my heart sank when we got into discussion of the theory of science, and it didn’t work for me.

Also chosen by Clarke in his take on the Year’s Best and I noted it was short, tight, claustrophobic and up close and personal (in contrast to a preceding story by Robert Reed).

The last Prime Minister of Italy has outlived his country, and his wealth has enabled a Swiss clinic to keep his fat, old body going well into his second century – until a final fling with a young woman. Sterling looks at fame, religion, hi-tech, surveillance and privacy, fame, and more. It’s not quite the cyberpunk future Sterling imagined for us back in the 1980s….

I read it in it’s original magazine publication, and I noted it a clever story.

Another story chosen by Clarke, and when I read it in its original publication I noted the story doesn’t read like one from a novice writer, the characterisation is excellent, and I’d be keen to read more from this writer.

Another story chosen by Clarke, and when I read it there I noted it was very well told, and altogether a pleasure to read.

A story in his ‘Great Ship’ series. I’ve found I’ve been getting less from these stories than in the past (and some of the stories were read so long ago they almost come into the ‘bygone era’ category). There’s a lot of musing in this one, but I have to admit I couldn’t engage with it.

Also chosen by Horton and Strahan in their take on the Year’s Best SF&F. A sensitive story, in which a speech pathologist works with a client who appears to be fluent in Old English. Full Best SF Review here.

A thoroughly enjoyable and entertaining story with some great tech in there, some interesting characters, some great turns of phrase, a real page-turner (or page-swiper if you’re using a Kindle) I noted in my review.

Two days before Christmas Day 2018 and I’ve finished the last ever Dozois annual anthology. I could feel at a loss, but I have a cunning plan : go to my bookshelves and work my way through the 60-years worth of Year’s Best anthologies I haven’t read yet!