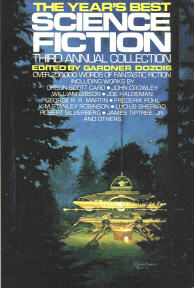 Lucius Shepard. The Jaguar Hunter.
Originally in : Magazine of Fantasy and Science Fiction, 1985

Onofrio Esteves, due to his wife’s frivolity, has taken up hunting jaguars again. One jaguar in fact, and quite a different jaguar to those he hunted in the past. The powerful force which is the jaguar takes him deep into the Central American jungle – very deep.

Deke’s a wetware VR game player who takes a local wheelchair-bound World War I biplane scenario champ on. He wins the VR battle, but little else.

Nuclear folly finally leaves the world a shattered place, thus solving Fermi’s Paradox. A young boy finds himself in Iceland, sufficiently far away from the fallout to provide a glimmer of hope through the nuclear winter. And perhaps to seeing the bigger future that Fermi pondered.

Sensitive story about memory and death. The rich are able to have their lives recorded, and playback of the video at mausoleums enable those left behind to re-live the past.

Orson Scott Card. The Fringe
Originally in : The Magazine of Fantasy and Science Fiction, October 1985.

A wheelchair-bound teacher in small farming community puts the finger on bootleggers.

A woman undergoes VR therapy in an attempt to resolve issues from her youth.

Rich, internationally renowned drug artist begins to see his clone/twin/daughter slipping away from him against a background of the summer solstice at Stonehenge.

Joe Haldeman. More Than The Sum Of His Parts.
Originally in : Playboy, May 1985.

Industrial injury leads to cyborgisation, including certain organs which do not normally feature in Science Fiction.

Nancy Kress. Out Of All Them Bright Stars.
Originally in : Magazine of Fantasy and Science Fiction, March 1985

An alien pays a short visit to a diner in the mid-West, giving the waitress pause for thought.

James Tiptree Jr. The Only Neat Thing To Do.
Originally in : The Magazine of Fantasy & Science Fiction, October 1985

Young Croati starts the story as a spoilt brat who uses her parent’s money to give her spaceship a deep space capacity. On her travels she comes across a microscopic alien with which she becomes intimately acquainted, and with whom her very future is predicated.

North African city, pre-Christian. A wizened seers offers a bleak perspective for those dining. Not SF.

Post-holocaust, and one variant of mutant are able to travel back in time to enter the heads of long dead individuals and attempt to alter the course of history.

A beatnik on the Med comes across a very, very strange brace of clones. They are attempting to escape from a bizarre alternate world dominated by the undead Hitler.

A roadside meeting with a furry alien which feasts on the fear of humans.

A strange West Coast port, with humongous crabs coming ashore, paper dragons being built in garages, and palpable undercurrents of just waiting for something to happen. Almost a Stephen King-esque story, except Stephen King would have added 600 pages and a bucketload of blood. Much the better without it.

The Truth Behind The Tabloid Headlines.

Lewis Shiner. The War at Home.
Originally in : Isaac Asimov’s Science Fiction, May 1985

A paraplegic has a long-shot option to regain everything – but it will mean losing all his memory. Is physical health that important to him?