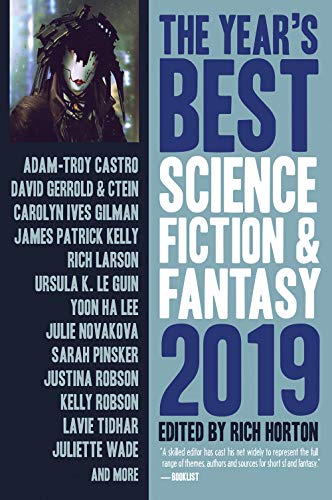 I’m restricting myself to buying the purely SF anthologies, and so this book won’t be gracing my shelves. I’ve nabbed the contents listing from Amazon and shall try my best to annotate where I have links to reviews of those (the few) that I have read elsewhere.

Alix E. Harrow. A Witch’s Guide to Escape : a practical compendium of portal fantasies.
I read this in 2021 in the Nebula Awards Showcase 54 volume, and really liked it.

I read this in it’s original appearance, and remember that I wasn’t really grabbed by the story of a spacer who turns her back on her team to become a creche leader. However, both Strahan and Clarke included it in their year’s best SF&F volumes, so clearly it ticked several of these three august editors.

Beth Goder. How To Identify an Alien Shark.

Alex Jeffers73 The Tale of the Ive-Ojan-Akhar’s Death

Yoon Ha Lee. The Starship and the Temple Cat.
Originally in : Beneath Ceaseless Skies (and still online there).

I read this in one of the other Year’s Best SF volumes and noted : “A great story, go ahead and follow the link above and read it. I particularly enjoyed the far-future world-building, and complementing a galactic sweep with a rather intriguing protagonist : not just a temple cat, but a dead temple cat. Not sure about tearing up, as many of the commenters on the online story mentioned, but, then again, as a dog person, if it had been a posthumous canine, then maybe the waterworks would have followed for me.”

Juliette Wade. The Persistence of Blood.

S. Woodson. Lime and the One Human.

I read this in another of the Year’s Best SF volumes and noted : “A story from an author new two me. Set in the near future in a residential establishment run by the Agency for the Care of Unassociated Female Minors. It’s a grim place for the teens living on the third floor – as yet un-fostered and with the prospect of a placement in a family dwindling. To make matters worse, on arrival they had their memories removed, to be returned to them at the age of 18, when they will be better placed to deal with them. There’s a touch of the One Flew Over the Cuckoo’s Nest, with a scary matron and punishment doled out for minor infringements. A new arrival is welcomed by the group of four girls on the third floor, but the fact that she appears to have her memories becomes an issues. A neat little story.”

Adam Troy-Castro. The Unnecessary Parts of the Story.

I read this in one of the other Year’s Best SF volumes and noted : “A clever tale within a tale (within a tale), from an author who invariably delivers. The protagonist looks back to the bucolic days of his childhood when he and young friend wandered the fields. It’s a post-something landscape, although that isn’t detailed too much. He recalls a fairy tale that was told to them by a couple of older people n the community, of a young boy who realises that he is quite unlike anyone else in his community (in fact the entire community is robotic, and is there to look after him). He runs away and falls into bad company (and it took me a while to realise it as a parable very similar to Pinocchio). Lovely writing.”

I read this in another of the Year’s Best SF volumes and noted : “The collection closes with an excellent lengthy novella set in the far future on an alien planet (somewhat old school eh??). A small group of humans are ekeing out a living on planet which was settled a couple of generations before them. Their parents were keen to leave Earth, to make a home based on rationality and science, but in their haste did not do enough research on their destination planet, and found out that the remote second star in the system had a nasty surprise for them – bathing the planet in UV and x-rays that are detrimental to human life. This happens once a year (there are long years on the planet) and so when the time arrives, the settlers scurry deep into caves. The protagonist is one of the few who travels far from the base, and he is called upon to lead a small team of younger settlers to meet a cargo vessel which has been slowly making its way by lightsail, having been launched before the original settlers set out in faster vessels. What goodies will be found? The problem though is that Umbernight is about to fall, and its almost time for the long months of hiding underground. There are tensions, both in the community and within the team that heads out to retrieve the cargo. However, as they finally get to the cargo, Umbernight falls, and it transpires that the UV and x-rays turn the planet into an altogether different and very, very dangerous place, leading to an attritional journey back to the caverns. Inventive setting, good characterisation and enjoyable.”

P H Lee. The House by the Sea.