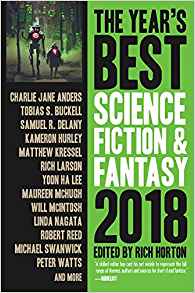 I’m reading and summarizing the two SF Year’s Best SF volumes, and skipping the SF&F Year’s Bests nowadays on account of the &F, and also as I’m reading much less these days, and the fact I’m running out of shelf space.

On Horton’s blogsite (crazy retro mofo – a blogsite in 2018!!) he listed the contents (click here to read, and referred to the fact that some stories he had recommended when writing about the Hugos didn’t appear in the volume for reasons other than the story itself. I’ve taken the liberty of cutting and pasting the contents (helpfully arranged in alphabetic order of source of original publication) – and have added links to those stories I have read..

“Time Travel is Only for the Poor” by S. L. Huang (Analog)

“Persephone of the Crows” by Karen Joy Fowler (Asimov’s)

“Soulmates.com”, by Will McIntosh (Asimov’s)

“Red Bark and Ambergris” by Kate Marshall (Beneath Ceaseless Skies)

“Whatever Knight Comes” by Ryan Row (Beneath Ceaseless Skies)

“The Secret Life of Bots” by Suzanne Palmer (Clarkesworld)
A ‘cute little story‘ I noted when reading it in it’s appearance in Neil Clarke’s take on the Year’s Best.

“The Tale of the Alcubierre Horse” by Kathleen Ann Goonan (Extrasolar)
Also included by Neil Clarke in his take on the Year’s Best, and I read it there and noted ‘a long and complex read‘

“The Hermit of Houston” by Samuel R. Delany (F&SF)

“The Sacrifice of the Hanged Monkey” by Minsoo Kang (Fantastic)

“ZeroS” by Peter Watts (Infinity Wars)
Also included in Neil Clarke’s take on the Year’s Best, where I read it and noted ‘a great balance of characterisation, tech, socio-political background and story here.‘

“This is for You” by Bruce McAllister (Lightspeed)

“One Hour, Every Seven Years” by Alice Sola Kim (McSweeney’s)

“The Fisherman and the Pig” by Kameron Hurley (Patreon)

“An Account of the Land of Witches” by Sofia Samatar (Tender)

“Extracurricular Activities” by Yoon Ha Lee (Tor.com)
Also included by Neil Clarke in his take on the Year’s best, where I noted whilst there was stuff I really did like, the story didn’t grab me

“The Martian Obelisk” by Linda Nagata (Tor.com)
Also included by Neil Clarke and I noted that it was a story that with one quibble it was a story I liked a lot

“And Then There Were (N – One)” by Sarah Pinsker (Uncanny)