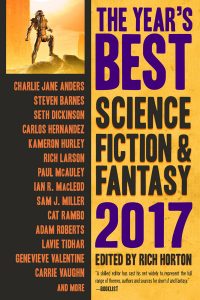 Horton’s take on the best in SF & F published in 2016 (or published in some sources with 2016 as the publication date).

Prime Books have published the ToC here. I’ve copied their list below (typos an all), which they have helpfully (they do mention librarians in the description of the book) put in order of place of original publication, enabling a very easy visual check of which sources Horton has drawn from the most.

“All that Robot Shit” by Rich Larson (Asimov’s)

“The Visitor from Taured” by Ian R. MacLeod (Asimov’s)
– Arguably not that much SF in the story I suppose, but as Scientist Fiction goes, it’s a good read. Full review here.

“In Skander, for a Boy” by Chaz Brenchley (Beneath Ceaseless Skies)

“Laws of Night and Silk” by Seth Dickinson (Beneath Ceaseless Skies)

“The Bridge of Dreams” by Gregory Feeley (Clarkesworld)

“Everyone from Themis Sends Letters Home” by Genevieve Valentine (Clarkesworld)

“Things with Beards” by Sam J. Miller (Clarkesworld)
A story chosen by 3 of the 4 Year’s Best anthologists, and a Nebula nominee. I read it and noted it as another strong story from Miller

“Between Nine and Eleven” by Adam Roberts (Crises and Conflicts)

“I’ve Come to Marry the Princess” by Helena Bell (Lightspeed)

“RedKing” by Craig deLancey (Lightspeed)
Also anthologised by Dozois, but I felt it reads a bit like it’s taken from a fairly average hour long TV drama

“A Non-Hero’s Guide to The Road of Monsters” by A.T. Greenblatt, (Mothershipship Zeta)

“Dress Rehearsal” by Adrian Tchaikovsky, (Now We Are Ten)

“Something Happened Here, But We’re Not Quite Sure What It Was” by Paul McAuley (Tor.com)

“That Game We Played During the War” by Carrie Vaughn (Tor.com)

If you like your SF and you like your F, then this is one of a couple of excellent anthologies covering SF&F. There doesn’t appear to be too much overlap with Strahan’s pick of the year in SF&F, so why not buy them both. In dead tree versions, not e-book versions. Trust me on this – I bought lots of e-books back in the day (Fictionwise anyone?) and they may exist in some format tucked away on an old laptop. Or they may not.