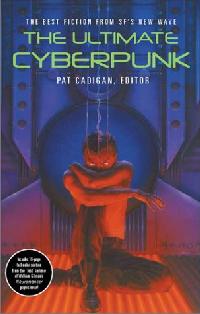 A thick book called ‘The Ultimate Cyberpunk’, edited by the ‘Queen of Cyberpunk’ Pat Cadigan. It can’t fail to hit the target, can it?

Having just read and reviewed Mirrorshades, the Bruce Sterling edited cyberpunk anthology from 1986, I noted that Sterling’s book, almost 20 years on, benefits from an excellent introduction, but suffers slightly from the stories, in that Sterling chose not to put in some stories which were widely anthologised elsewhere. So this volume has the opportunity to provide a retrospective on cyberpunk, and to provide an ‘ultimate’ collection.

Cadigan’s intro rather rains on the parade in taking issue with the word ‘ultimate’ in the title, pointing out that it is a publisher’s whimsy, and that constraints of space mean that the volume can’t be a definitive selection. And she owns up to not attempting to provide a definitive history, and, with the absence of any editorial intros to the stories in the collection, rather leads the reader wondering just what role she had in putting the anthology together.

So what of the stories?

From the outset you know that you are reading a thing of beauty created by a master. The rhythm of the story is in your face right from the start, and, as with the first story, you feel you have to check the date again – and yup, 1954. Not that long after Asimov was writing his fairly ponderous robot stories, we have here something quite different. A dubious character and his android flee the scene of brutal murder after brutal murder. But the opening words set the scene: “He doesn’t know which of us I am these days..”

An excellent story, but this reviewer was left guessing as to exactly what it was in the story that would make it an opener for a Cyberpunk anthology.

Cordwainer Smith. The Game of Rat and Dragon
Originally in Galaxy, 1955.

Another interesting choice. Smith’s story provides an alternative to the traditional space opera, in which Man (and mostly men) whizz around space. Here space is something to be conquered, and it takes ‘pinlighters’ and their feline companions to fight the enemy that lies in the deep darkness of space.

I’m not clear how this SF story is any ‘more’ of a precursor to Cyberpunk than many others.

Philip K Dick. We Can Remember It For You Wholesale .
Originally in F&SF, April 1966.

A more obvious choice, as the classic VR story, one of Dick’s more accessible stories, provides a clear link to Cyberpunk’s view of the future.

James Tiptree Jr. The Girl Who Was Plugged In.
Originally in : New Dimension, 1973.

Cadigan does cite Tiptree as being overlooked in the antededents of Cyberpunk. Certainly this story, in which the ugly duckling is turned into a beautiful swan through controlling a beautiful body via a cybernetic link, is close to Cyberpunk. Similarly Tiptree’s

Rucker’s inclusion in the Cyberpunk genre is more down to his somewhat ‘gonzo’ approach, and his ‘trilogy’ – ‘Software’, ‘Wetware’ and ‘Freeware’. Whilst his Kafka-esque story ia fine, perhaps a more representative example of his fiction could have been chosen.

One of the all-time SF classics, let along a cyberpunk classic. “It was hot, the night we burned Chrome”. Read it and weep, tyro SF writers.

Another classic, the omission of which from the original ‘Mirrorshades’ I noted. (Sterling chose the short story ‘Petra’ instead.) Vergil Ulam’s experimentation takes him a lot further than he planned…

Lewis Shiner. Till Human Voices Wakes Us.
Originally in F&SF, May 1984.

A story that appeared in Mirrorshades but which I wouldn’t have chosen to include. The story about a marriage breaking apart and the husband finding his future lies in a radically different direction than he had planned, is fine enough, but I think I would have used the space for something else.

Ditto the previous entry, a novel extract which reads like the storyline from any number of computer games (ie Deus Ex) and any from a current crop of films (The Matrix). On the basis that this extract appeared in Mirrorshades, perhaps a short extract from Neuromancer or one of the seminal cyberpunk novels might have been more appropriate?

Included in Dozois’ 3rd Anthology, where I read it first. Deke’s a wetware VR game player who takes a local wheelchair-bound World War I biplane scenario champ on. He wins the VR battle, but little else.

Turner Choi is an American computer expert working in Brunei, and the hot sultry setting is a background to his finding himself, and another, against politicking and danger.

An odd selection, a story some several years after the initial years of Cyberpunk. Nothing wrong with the story at all in which a criminal doing community service in Holland encounters macabre blue-skinned gen-engingeered pleasure creatures- McAuley extended it into a novel (‘Fairyland’) – but it sits rather oddly in the collection. Why this story over a hundred others?

The volume benefits from a full-colour insert of 12 pages from a ‘lost’ graphic novel version of Neuromancer, and a reprint of webpages listing ‘Bruce Sterling’s Idea of What Every Well-Appointed ‘Cyberpunk SF’ Library Collection Should Possess’.

But, all in all, a bit of a curate’s egg. The early stories, and the final story, don’t quite fit IMHO. And with the lack of a ‘real’ introduction, and story intros, the extra size that this volume offers over ‘Mirrorshades’ hasn’t really be used to the full. A missed opportunity.