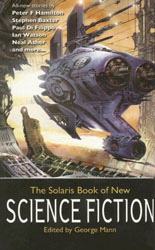 Solaris Books is a new imprint from Black Library Publishing, which is part of the Games Workshop empire. Now, Games Workshop and I I go back some 30 years, as I can clearly recall buying the first issue of their ‘White Dwarf’ magazine whilst on a family holiday in Scarborough. However, my two sons have been heavily into Games Workshop for over 10 years, and I dread to think how much has been spent on magazines, figurines, and paints over that time, with pretty much every birthday and christmas featuring boxed sets of figures or latest versions of rule book retailing at £40.00 or more. And now, like me, as they approach their late teens, they’re growing out of it, so there’s about £2000 worth of bloody figurines, rule books and paints gathering dust in their bedrooms. Doh!

Games Workshop have published a number of novels/stories set in their Warhammer series written by British SF writers under pseudonyms, and Ian Watson has written a number of darker novels in that setting.

Anyhow, back to the volume in hand. Solaris Books are advertising heavily, and have a good website (not always the case with publishers), and its good to see that amongst a raft of novels they have invested in a short fiction collection. A quick look at the contents listing shows that editor George Mann has drawn heavily tried and trusted, mostly British, writers.

The volume opens with Jeffrey Thomas’ ‘In His Sights’. The story is set in his ‘Punktown’ setting, as is his ‘Deadstock’ novel, one of the first Solaris Books titles. However, in this story the setting is quite anonymous. There are two POVs in the story, both ex-combat veterans, and perhaps the story would have been better focussing purely on the primary character, a vet with a genetic chameleon mutation which has him take on the appearance of those surrounding him. Unfortunately for him his mutation has fixated on the alien race with whom humanity is at war, which is a bit of a hindrance when he’s back at home. The other vet character spots him, and takes him for an alien, and the story sort of builds up to the two coming face to face, although in the end it’s a bit of an anticlimax. His time on the alien planet is also covered, and there’s an absence of a primary focus in the story which leaves it just a bit meh.

Neal Asher’s ‘Bioship’ is a step up, portraying an intriguing bio-organic ship, on which a mutated and perversely unpleasant ship’s captain is after an attractive female passenger. He is thwarted by the ship, which is the real character of the story, and which has plenty of scope for development in future stories.

Jay Lake and Greg van Eekhout’s ‘C-Rock City’ is one of the better stories in the volume, and starts strongly with a young man getting shore leave from his space vessel, and getting sweaty in a hammock with his muscley old friend Rocky Muldoon, who is evidently his first port of call whenever visiting C-Rock City. The hollowed out asteroid is an interesting setting, and it transpires that the young man’s personal history is embedded deep in the city, and the authors play out his exploration of his own genesis every effectively.

James Lovegrove’s ‘The Bowdler Strain’ stretches out a single humorous conceit so thin it becomes transparent.

Paul Di Filippo’s ‘Personal Jesus’ is a much subtler story, taking a satirical look at people’s devotion to their gadgets to an illogical extreme. iPods (other mp3 players are available) become a route to individual’s eternal salvation, as a godlike voice guides them in mysterious ways, his wonders to perform. It appears that humanity has tripped a switch that has highlighted us as species that needs to be managed, and that management is in the shape of those who are plugged in (and they are the vast majority) being uploaded and removed from Earth, leaving a lucky few behind.

Peter F. Hamilton’s ‘If At First’ is a time-travel story with a twist in the tail which seasoned readers will spot a long way in advance.

Adam Roberts’ ‘Distillation of Grace’ has left me confuddled, as even after two readings, I’m not clear what his story, which sees divinity being created through successive narrowing of the gene pool, is saying.

Stephen Baxter’s ‘Last Contact’ is a very strong story, although it could be argued that it pulls the heart-strings a little too obviously. But the final scene is a memorable one in which a mother and daughter sit in a garden watching the end of the world, as newly found fellow races say hello and wave goodbye as the darkness rushes towards us all like a tsunami. Worryingly, Baxter’s scientific background makes it all too believable. But it has to be said, that Baxter, Arthur C Clarke’s heir apparent, has produced a short beauty of a story which is redolent of Clarke at his best.

Ian Watson’s ‘Cages’ has some startling images, particularly the post-punk imagery of humans with various parts of their anatomy encased by alien cagework. Watson leaves the whys and wherefores of the aliens alone, with humans struggling to make sense of it, and a rock concert attempt to challenge the bee-like aliens giving a glimpse of the bigger picture. To complement C-Rock City, there’s a hint of sapphic naughtiness.

Maybe I’m getting to be a miserable old git in my old age, but the third funny story in the volume, Mike Resnick and David Gerrold’s ‘Jellyfish’, doesn’t do much for me either. It explores the inner workings of the mind of an SF writer, with some in jokes, You’ll probably go for it in a big way, or be left unmoved

Mary Turzillo’s ‘Zora and the Land Ethnic Nomads’ is a story whose cumbersome title does it no justice. On a corportation-controlled Mars, a young family are forced to flee their smallholding following sabotage by visitors. However their young daughter is smart enough to spot the flaw in their deception.

Brian W. Aldiss’s ‘The Four Ladies of the Apocalypse’ sees a Grand Master pop up with a piece that essentially says : “This is the New Wave. It was a Big Thing 40 years ago. Look upon our works, and despair!”

Keith Brooke’s ‘The Accord’ is an effective piece, following the affect a visit by a hunted post-human has on a small coastal community. The relationship between him and the inn-keeper’s wife, and the cliff-set village, are both handled well.

Tony Ballantyne’s ‘Third Person’ is a better piece, which has the reader scratching their head at the start, to understand just what is happening, as holidaymakers are instantly co-opted into the armed forces in a European conflict. All (well not all) is revealed as the story progresses to an full stop.

Eric Brown’s ‘The Farewell Party’ is in his Kethani series, which featured regularly, very regularly, in Pringle-era Interzone. The main problem with these stories, and for some others, is that they essential re-tread the central conceit, without taking it further. That conceit is that advanced aliens enabled humans to chip themselves so that when they die they can be resurrected on the alien planet, and choose to remain there, travel elsewhere, or return home. And each of the stories features people doing just that. It’s as if Samuel Beckett wrote a dozen Godot plays, with each one featuring a changing cast of down and outs waiting for Godot. Or, more prosaicly, it’s an SF equivalent of longrunning British comedy ‘Last of the Summer Wine’, a Yorkshire setting in which pretty much the same thing happens each episode, and has been happening for many, many years. Anyhoo, yet another group of people congregate at a rural pub to ponder the Kethani offering, and, er, they come to a conclusion.

Sixteen stories, of which I’d say 8 hit the mark. It’s a collection of fairly traditional SF, eschewing the new speculative, as perhaps might be expected with the authors for the most being well established. The majority of the stories could have been written anytime during the 1990s, making it a good, if safe collection, and a solid start.

Ideally we’ll see more short SF from Solaris, and personally I’d like to see it take the form of something that will give it a unique identity. Personally, I’d like to see an annual Best of New British SF, collecting the best published in the previous year, and some new fiction. There were a lot of regularly published collections during the 1960s/1970s, and maybe Games Workshop has the business robustness to make such a regular collection work.