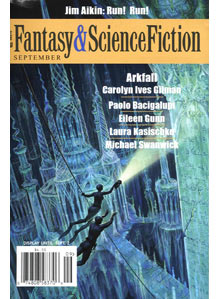 The lead-out story in Bacigalupi’s collection ‘Pump Six and Other Stories’. Editor GvG warns that the story may not be suitable for younger readers, but I beg to differ as it is exactly they who should be reading it!

As in his ‘The Calorie Man’ Bacigalupi creates a believable, original near-future society, and there is a lot of SF whose settings are neither believalbe nor original.

The story sets out with the reader slightly unsettled – Alvarez walks into the kitchen in the morning to find his girlfriend with her head in the oven, the gas oven, with a lit match. She is trying to work out why it isn’t working, and she takes umbrage, violent umbrage, at his pointing out that what she is doing is not a good idea.

The couple make up after a big row, and then Alvarez heads to work, to be met by a colleague who alerts him to the fact that the eponymous Pump Six, one of several massive sewage pumps servicing the city, hasn’t been working for some hours. Unfortunately, his colleague hasn’t thought of checking the manuals. We gradually find out more about the urban setting, where the population are regular pill-poppers, the younger generation spend a lot of their time fornicating, and whilst the machines and infrasctructure just about manage to keep going on auto-pilot, there is a diminishment in the overall level of intelligence and motivation in the human population.

It would appear that we are headed for a morlockisation, bent on pleasure, with little awareness of the wider surroundings, of literature (the closed, and empty library is a symbol of our loss of knowledge and culture).

It’s a bitterly dark take on where we may be headed.

Elderly Mr. Rentz gets a knock on the door. Is he the man they are looking for? Well, he’s an old man now, and the person they’re looking for was a much younger man, but that was some time ago, so perhaps even though he is an old man know, it is time to address the actions of that younger man he once was.

A substantial story – in many ways. Gilman has put together a believable alien planet, a different human society, and believable, complex characters, and spun an adventure tale that almost matches the setting.

The ark Cormorin is a bio-ship, a partly biological sub-marine habitat for humans who live therein, in the dark seas of a very alien planet. Those who live on the arks have a communal life, and are very opposed to confrontation or direct comment, alluding to the actions of others and their preferences, with stilted speech patterns to match. Osaji and her aged grandmother are coming to a subterranean port, Golconda, and Osaji is worried for her grandmother, whose ill-heath and early stages of mental decline are not only painful to witness, but an increasing strain on her.

Osaji moves in temporarily with her sister in the town, but finds the call of the seas too much for her. She has to decide whether to leave her grandmother in port, or take her with her once more. In the end she decides on the latter, and on the jetty, she comes across an aggressive offworlder, whose behaviour and beliefs are anathema to her.

Following an undersea eruption, she, her grandmother, and the man are set adrift in an ark, which has to follow the currents. This is indeed the way of her people, but due to the eruption they are flushed out of the enormous volcanic basin which is the only part of the planet they know, into unchartered waters.

Osaji is Rose Sayer to his Charlie Allnut, and we follow this odd couple as they make the most of their bleak future as the explore the deep seas and find out more about the planet.

The roughneck offworlder never ceases to stop thinking of ways to get the ark moving in the direction they want, as opposed to blindly following the currents, and in the end succeeds, giving the pair a chance to reflect where they want to go with their lives.

It’s a page-turner, and one of my picks of the year so far.

Rand B. Lee. Picnic on Pentecost.

There’s always a danger that after a couple of really strong stories, others in the issue will pale in comparison. Not so Lee, who furnishes another SF story of high quality. It has a strong opening line “The planet has a face like a dead circus performer..” and goes on to explore the impact of the planet on four closely linked humans who end up on the planet. We follow one of them, left alive on the planet, but .. changed .. whilst one remains, partly alive, sort of, and two are definitely dead. Sort of.

We follow Elizabeth as the planet slowly uses her to its deadly effect, transmogrifying her, and using her to help it communicate its message to the dark void. She ends up absorbed by planet, aware, but not human, giving birth to others that will soar and fly.

An altogether lighter story, which take some getting used to after such a heavier piece, in which a correspondence between a recipient of an email offer, and the company making that offer, explores just how writers can make the most of their skills.

A young woman working a till at a grocery store attracts the attention of a regular shopper. He’s a nice guy, but not a regular guy, as he turns out has has lots of money. He also has some advice on stocks and shares (ha!) and in leaving the young woman, he gives her the means to get the most out of the imminent technological revolution, which enables humanity to reach for the stars and to virtual immortality.

Centuries later, she resolves to find the man, who had promised to come and get her after the machines take over. Whilst she does find him, she does not find resolution.

Doh! Right at the end GvG slips in a short fantasy about unicorns, or rather about a young girl’s memories of those magical days of her youth, the lost unicorns a symbol of what has been left behind in becoming an adult.

An almost fantasy-free issue, and not only is it full of SF, it’s full of extremely good SF. Bacigalupi, Gilman and Lee providing top notch SF, with Reed only a whisker behind.