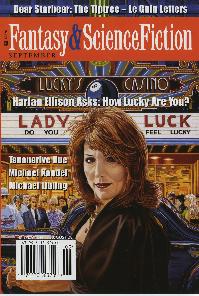 This issue featurs a trio of stories by authors who have responded to a story idea from Harlan Ellison – what happens when Lady Luck meets the unluckiest guy in the world? Rather than the setting being a casino, Due has an unlikely setting : an old people’s home in Cuba. Mr Sanchez, has recently had a stroke, and uses the long hours to bemoan a lifetime of ill luck. Is he doomed to spend years with bingo the highlight of the day. However, it appears that Lady Luck is walking the wards, and her touch brings success at bingo followed shortly after by an exit, feet first, from the home. Will Mr Sanchez strike lucky and follow their path?

John Morressy. The Return of the O’Farrissey.

A posthumous piece of blarney from Morressy, in which the father of the magician Conhoon’s apprentice, Kate O’Farrissey, makes an uwelcome appearance, and himself and the magician get involved in a tug of war over the young woman.

Matthew Corradi. The Song of Kido.

A second, interesting story from Corradi in FS&SF this year, following on from Journey to Gantica (Jan 2006). He hasn’t gone for an easy story in either case, and here he delves deep into Heart of Darkness territory as a human stalks an alien creature on a distant planet, hoping that the Song of Kido will free him from that which he has been trying to live with for some centuries. Can he embrace death as the ultimate freedom?

It’s an interesting setting, but for me the main issue is that it feels like a final chapter of a novel, or the end of a longer story, in which we have seen first hann those things which are haunting the protagonist finally resolved. But rather than this, the story pitches in right at the deep end, and we hear the protagonist relate those things which are haunting him, and describe the political backdrop, the technology behind interstellar jumps etc.

Evidently, according to the editorial intro, Kandel does something called ‘schlubs’ well, which may have relevance to this story, but what with the Spanish and the Irish in the previous tales, it’s all getting a bit League of Nations for me!

Here a wry dialog between a monk and a young initiate who worship Gumby and whose holy book is oft cited in the conversation, makes way for the tale of Gumby himself, and his l-o-n-g lifetime of Clousea-ean bad luck, and the effect of that luck on the rest of the world.

I don’t as a rule comment on anything other than the fiction in F&SF, but will make an exception for the correspondence between UKLG and James Tiptree Jr/Alice Sheldon. I’ll make an exception as it is one of the strongest pieces I’ve read for quite some time, something that brings completely to life the postal correspondence between the two women, which started initially with Sheldon still in the male persona of ‘Tip’. In itself worth buying this issue for. Sadly email and mobile phones will pretty much put to an end to this kind of heart-opening, lengthy, thoughtful correspondence, and this shows just how big a loss that will be to future generations.

A father finds himself becoming drawn to a quite horrific resolution to the problem he sees that his wife and himself (and other parents) is the series of subtle but still impactful genetic tweaks that their son has ‘benefited from’. Is this super-healthy, super-intelligent, but ultimately super-arrogant young man an example of the future for humanity, with the rest relegated to being ‘mundanes’. The recently discarded and thrown-out soccer ball is a symbol of the lost youthful innocence.

Michael Libling. If You’ve Ever Been a Lady.

Libling tackles the Ellison brief as posited, with the beautiful Lady Luck in a Las Vegas hotel coming across a man seemingly immune to her charms. We were introduced to Denny in a most peculiar position : under the marital bed, long kitchen knife in hand, ready to inflict an immediate post-infidelity death upon his wife and her lover. However, as ever, his luck runs out, and he ends up on the receiving end of the sharp end of the knife, which isn’t a good look to have at a company weekend away. Worse still, his long run of bad luck as a salesman finally gets too much for the company to bear, and he’s out of a job. Can Lady Luck change his fortune?

The Le Guin/Tiptree piece will be one I read again out of choice. I may end up reading the Casil story again in one of the Year’s Bests, with the others being of the usual well written F&SF type.