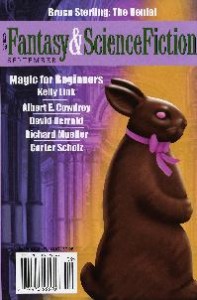 This issue is book-ended by two shorts from Gerrold. In the first the protagonist has a conversation at a diner with Pope Daniel the First of The Church of the Chocolate Bunny, who challenges him to consider the nature of sainthood and whether that is something to which he can aspire. (You need to read this in the context of the story at the other end of the volume).

Neat little tale in which the Italian Renaissance is responsible for the invention of computing, and in which Computos Fenestrum (work it out…) is vying, in a life or death struggle, with Computos Malum Opera, for the Papal blessing.

Title story from Link’s latest anthology. A strange setting, just slightly different to the ‘real’ world- enough to be somewhat unsettling. Jeremy Mars is one of a group of teens who are obsessed with a strange, dreamlike TV programme called ‘The Library’ in which all is not what it seems. The programme flits from channel to channel unannounced, and they are avid fans who never miss an episode, and who discuss ad infinitum the whys and wherefores of each episode. Jeremy’s parents are going through a bad patch, and a road trip ensures, in which Jeremy becomes more closely involved with the characters in the tv series.

The story ends, dream like, somewhat arbritrarily, leaving the reader with a vague memory of people, events but also of the feel and the emotions if not the plot.

Carter Scholtz. I Didn’t Know What Time it Was.

A jazz riff on music buff time tourists popping back to watch legends of jazz doing their thing. For one guy he gets more than he bargained for. As Louis Balfour would say : ‘Nice’. [who he?]

Arthur Porges. What I Owe to Rick.

A single pager in which knowledge of what a square egg laid by a cockerel really means….

Another tale plucked from the darker corners of New Orleans, in which someone who buys an old property at a rock bottom price finds that he has bought into its (ghostly) history.

A fantasy setting in which a flood devastates a small rural community, and a cooper is alarmed to find his wife is not as dead as she should be. However, in seeking help he finds that he has little right to take (dry) moral high ground in criticising her refusal to accept her fate. Fine enough, and we see a lot of stories like this in F&SF, but I’m just a tad disappointed, it being from Bruce Sterling, from whom one expects just a bit more.

A counterpoint to the opening story, in which the same pair ponder matters, with Pope Dan taking the role of Devil’s Advocate, and challenging his friend to consider just how far could one go when going back in time to stop someone doing something which will have terrible consequences. His friend, an SF writer, begins to see the corner into which he is being painted, for does not the bible state (as we know from The Man with X-Ray Eyes) : ‘if thine eye offends thee … pluck it out!’

A good issue, as ever, without any story really hitting the heights (Link getting the closest).