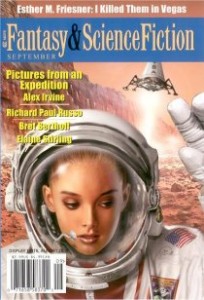 Bret Bertholf. Alfred Bester Is Alive and Well and Living in Winterset, Iowa.

A ‘doozy’ according to the editorial intro, and I concur.

What is particularly refreshing is that Bertholf adds a variety of graphics (from Virgil Finlay to Dr Seuss) to an already psychedelic text that could come straight fromthe 1960s, as an AI with human origin is let loose, and we see the world through the disorientated Alfred Bester-triggered AI.

Esther M. Friesner. I Killed Them in Vegas.

I wryly satirical take on the entertainment business. A Jewish vampire standup comedian is going down a treat on the club circuit, but when the silver screen beckons he realises that he has a problem – his image won’t of course show up on screen. His partner, once bitten and thus not yet vampiric, sees an opportunity. But they all manage to live happily ever after – well, as happy as anyone is in the entertainment business.

Eugene Mirabelli. The Only Known Jump Across Time.

A tenderly romantic love story, a love which grows over the seasons, and then blooms after the couple share a time travel jaunt that binds them together for the future. (The fact that they don’t travel in time, but spend 24hrs unconscious, is a delightful twist!)

‘There are more things in heaven and Earth…’ goes the Shakespearean quote, and a young boy searching for his lost mother finds the answer to the mystery of her disappearance through a closer engagement with the forces of nature, aided and abetted by a New Age shop owner and a young girl.

Russo posits a near-future Earth in which a lot of civilisation has been reduced to poverty and scavenging, whilst others live in luxury. Is it ever thus!

One opposed to this status-quo is using non-violent means of disrupting the lives of the ‘haves’ – including poisoning the water supply to a Natatorium – a glass-domed water sport entertainment complex. In meeting, and being helped by one of those living outside the dome, someone who has had the opportunity to spend a lot of time reflecting during his fishing for food, the terrorist has to come to terms with his decision not to embrace violence.

Alex Irvine. Pictures from an Expedition.

Another SF story! And this one is top quality.

Irvine takes us on the first manned trip to Mars, providing a realistic take of astronauts whose flaws become apparent during the months-long journey, the media obsession, the commercial interests (it is a private mission) and the politicking.

Tensions arise when, amongst other things, the media hooks on to the most glamorous of the crew, even when it is another, and not she, who eventually discovers life on Mars. That finding is seen as less important to the company than the water which is found.

The crew member who has been getting the most of the attention begins to feel the strain, and she makes a shattering choice – to stay behind, and not to return to Earth. The remaining crew have a big decision to make – do they attempt to take her back by force, thus jeopardising themselves by having a psychotic individual in the ship with them. Or do they accede to her demands? Read it and find out! (If you don’t get the magazine then wait til next year when one of the Years Best anthologies is bound to pick it up.)