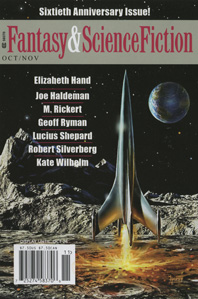 A middle-aged man, ballet dancer initially, ballet teacher after an injury, loses his job but gets a timely invitation from friends to house-sit their remote property whilst they take a winter break. As the snow settles in (shades of The Shining, namechecked in the story) Philip, with recurrent nightmares of forever falling, finds a young, naked man half-dead outside the house. The young man has an ethereal quality, and awakens feelings in Philip that he has long kept buried.

The story reaches a climax as Philip has to choose whether to remain in the world he knows, or take the hand of the young man and leave all he knows behind. It’s a well-handled, sensitive story.

Something is waiting in the dark, guardian a treasure – a treasure that an academic has been trying to unearth for some time. He has been researching a duo of desperados in the Deep South in the 18th century. Waylaying unfortunate travellers, the very unpleasant partnership of Robert Tole and Mistress Justice have built up a handsome treasure trove, and after one final raid, decided it was time to make off with their ill-gotten gains. Unfortunately for them, all does not go to plan, and the location of their treasure is a cryptic puzzle.

The academic, Marx, and his student Keynes are a pair with a shared liking for The Times crossword, but it is the student who helps crack the code, that leads them to the treasure. And that which guards it.

As ever with Cowdrey, some very well drawn, and very unpleasant characters who step off the page.

Robert Silverberg. The Way They Wove The Spells in Sippulgar.

A story set in the rich, detailed multi-faceted world of Majipoor. Following the disappearance of his wife’s brother, Melifont Ambithorn, the protagonist embarks upon a long journey on his wife’s behalf to a distant city to collect his belongings.

Silverberg describes the journey in part as a travelogue, detailing the varied cities and landscapes en route, which makes you envious of someone who has such landscapes in their head. There is melliflousity in the naming of places and people, and the destination of Sippulgar is a city which entertains many religions and faiths, which the protagonist sees as confirming his lack of belief. However, in having put forward the exact nature of his brother-in-law’s death, at the hands of summoned daemons, he has to face up to his own lack of faith and decide just how much he wants to find out what did happen.

A variation on the soldier who finds himself at the mercy of the women of the opposing army. This time it’s a slightly skewed world of ours, in which the man is a teacher, who takes his charges to watch a nearby battle, only to find themselves brutally caught up in the violence.

He flees, and in this world, he is able to cover more land and landscape than you would expect. He finds himself with a mother and daughter of the enemy, and is entranced by the singing of the younger, but under threat by the mother. We see him build a relationship, but will the cold logic that is his way, hold sway over the love he feels, and will the call of his own land drown out the sound of her voice?

Ryman memorably took us further East than SF/fantasy normally gets, in his excellent ‘Pol Pot’s Beautiful Daughter (Fantasy)’, and this follows suit.

Humanity has ceased reaching for the stars, a theme addresses regularly in SF in recent years, often in the alternate history mode. Here he takes a close look on its impact on society at large, and a small family. A mother, abandoned by her husband, had fled with her children, and the new head of the family is somewhat bemused to find himself in that role. He struggles with the relationships, and the motivations of his wife and her children – is she just interested in him as a route to safety from the purported dual threat of cometsrike and alien attack.

No longer reaching outward, humanity is closing in on itself, and is seeking refuge deep underground. The hermetic nature of a future, entombed but with a virtual reality, work for him and his family. Surprisingly, the semi-autistic/catatonic child who has struggled with life above ground, finds the new life one that suits her. And he has to struggle to find an accommodation with his new accommodation. Excellent.

A lengthy story from Shepard, whom appears less regularly these days than I like. The opening sets the scence vividly, an American community opting-out and living by the side of a river at the bottom of a very narrow ravine. The description is excellent : “the precipitous granite walls are concave, forming a great vaulted roof overhead, and this concavity becomes exaggerated near the apex of the gorge, where the serpentine roots of oaks and hawthorn and elm burst through thin shelves of rock, braiding their undersides like enormous varicose veins”.

Into this community comes Clyde, and we follow him thorugh his initial introduction to the community, and the people he meets as he settles in. The characterisation is top-notch, and dialog is nuanced and far, far ahead of a lot of SF and fantasy. There’s something strange happening at one end of the ravine, and Clyde ignores warnings to steer clear of the ex-wife of the local millionaire who is bankrolling the community, and whose company has been carrying some genetic modification.

The story moves towards a dramatic ending, seen mostly through the drug-hazed eyes of Clyde, and finishes with him picking up the pieces. High quality.

Reed takes another of his looks into the strange goings-on in suburbia. Nursing someone, or something, in his house, Jake has the frighteners put on him by a scary, meth-addict type who comes knocking on his door, asking for help having broken down. He shuts the door on him, but in peeking out behind his curtains, he is entranced by the man’s young companion. There’s something about her, which we are not let in on, but it is clearly something related to his hidden companion.

It’s a complex relationship he has with his young ‘partner’, and it’s not the difference in age that’s the issue.

Short horror mystery on an unwelcoming alien planet. A locked room murder mystery, with the body drained completely of blood.

Ron Goulart. I Waltzed With A Zombie.

Gently amusing look at Hollywood, in which a B-movie writer is trying to pitch a zombie musical, who finds out that one of the studios appears to be using a lead man of the undead persuasion.

In the matching issue from 2008, Rickert’s ‘Evidence of Love in a Case of Abandonment : One Daughter’s Personal Account’ was a dark, disturbing take on a near-future USA. This is in similar vein, in a land de-populated of vegetation, with the offspring of the war-ravaged community reaping was has been sown, in having a varied range of congenital abnormalities.

The President coming to town appears to offer a chink of light, and when he decides to take one of these children to join his bevy of brides, better still. However, his bride-to-be still loves a local, and is willing to pay the price to resist the wedding.

Ron Partridge. Through Time and Space with Ferdinand Feghoot – LXXI.

Engrossed in this SF story, I was under the misapprehension that I was reading a Haldeman story (F&SF print only the story title, and not the author name, on pages other than the first one). I was thinking that Haldeman was returning to some of the themes in his ‘Forever War’ milieu, and doing it to the same standard.

It’s a cleverly constructed story, set during a visit to an ex-lover who has eschewed the opportunity to be reborn against as a young person, and who is now aged and wrinkled. The young (in body) visitor talks about a former love, a short affair during combat R&R. He remembers how we woke up after being ‘reborn’, his old mind in a new body, but unable to remember the events leading up to his death in combat. Disturbed by this, he refuses the chance to head back home, and waits for the return of his lover. Whilst doing so, he moves in with a prostitute who is working the base, who swings both ways and who has the necessary wherewithal to be fully active in both modes.

The characters are well drawn, and we follow the protagonist as he deals with the loss of his life, his career, his memory, and his lover, until he finds out the reason behind those losses, and how he came to come to an accommodation with those events, as he has to do with the now-elderly ex-lover he must leave again.

It’t not by Haldeman, but could easily be.

Kate Wilhelm. Shadows on the Walls of the Cave.

I’d been looking forward to reading a Wilhelm story at the end, and wasn’t disappointed. Well, I was disappointed, in that half way through the dozen or so pages, I became increasingly disappointed that so few pages were left. It’s a masterful story that drops you straight in to a deep, emotional engagement with the lead character. She is woken up from a nightmare, one she has been having on and off since childhood – a childhood blighted by the disappearance of a young friend whilst playing in a cave. Called to attend a funeral of the grandmother whose house the friends had been staying at on the long ago fateful day, she is persuaded to revisit the cave with the other remaining survivor, who feels he has to confront whatever it may have been there.

BIG SPOILER AHEAD! The tension is palpable, as the two grownups confront the cave. She is unable to go further, but ties a rope around her waist and turns her back as her friend heads into the cave. The outcome is a surprising one – her friend comes out with the young child, who has somehow not felt the passage of the decades, and they take him to a house full of mourners, with an inexplicable conclusion to a long-standing mystery.

This 60th anniversary issue is an absolute beauty. The stories are, with only a couple of minor exceptions, top quality. There is further value to the author introductions which reflect on their first contact with F&SF. The only disappointment is knowing that so many readers of SF&F only read novels, and are missing out so much. I’m working my way through Alastair Reynolds’ ‘House of Suns’, and whilst it’s an enjoyable read, in constrast to this issue, it feels extremely over-long, and far less mind-blowing.