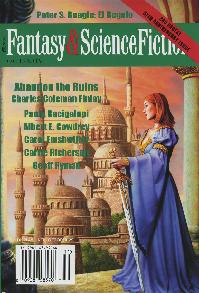 The bucolic pair, Dr. Dorshin, psychiatrist, and Professor (Dr.) Drea(d) both have the pleasure of knowing, in a professional capacity, one U. Pierson Clyde, who believes that Earth is an egg, laid by the Mother Dragon, which will soon hatch, as a previous planet in our solar system did aeons ago (and whose detritus is now the asteroid belt.)

Drea attempts to resolve Clyde’s obsession through a literary approach, encouraging the man to explore the recesses of his mind through a story-based approach. But can you guess the ending? (Almost, for in fact it is Mars which hatches out next..)

Marvyn (8) and Angie (12) are typically siblings in many ways, constantly teasing and at each other’s throats. However, you Marvyn has some hidden depths, for it transpires that he has magical powers, and has been informed by their latino housekeeper that he is a male witch. He explores the extent of his powers, and tries to help his sister our with regards to a young fellow student on whom she has a crush. However, things go very badly wrong, and Angie has to explore her inner strengths to help resolve the situation.

The preceding stories are fine as far as they go, but they don’t go that far. This is a shorter story, and much more impactful. A relatively near-future setting, post-war and post-climactic change, with a few women ekeing out a living barely above the subsistence farming level. A young woman is hopeful of seeing her brother again, and when there are signs of someone visiting her cottage at night, her hopes rise. It turns out that a man, who is weak, and battle-weary, but still a man (and very much a rare commodity), she turns a blind eye to his likely misdeeds in the recent past. We follow her as she helps him back to health, and introduces him to the community.

However, something as simply as having a roving eye is enough for her to realise that he is like all the other men, and in a ghastly final paragraph we find out just what his fate is to be. (clue: alfalfa beans)

Further adventures of Maggot, the young man raised as a troll (‘Democracy of Trolls’ Oct/Nov 2002 and the novel ‘The Prodigal Troll’). I did start the story, but my suspension of disbelief quickly shrivelled, like a willie after an early morning swim in the cold sea.

Carrie Richerson. ..With By Good Intentions.

You would have to have Major Cojones on your team if you took a certain paving contract. Fortunately Mr. Sandoval is quite the match for the sulphurous Big Man who tries every trick in the book to get his contractor to default.

Last year’s double Oct/Nov issue had Bacigalupi’s ‘The Calorie Man’, roundly praised by many, myself included. Here he provides similarly impressive fayre, with a quite different, noirish story. The story and the action rolled past my mind in very much Bladerunner-ish style, with a cop increasingly considering whether he really agrees with the work he is doing.

And what it is he is doing is what gives the story some added oomph. The future Bacigalupi paints is the reverse of the one in ‘The Calorie Man’. That story had humanity reduced to a more mechanical, less hi-tech future. Here it is very much hi-tech, with massive city complexes, and, crucially, rejuvenation. With virtual immortality, the potential for population explosion has been brutally addressed – there are to be no children. And for those who transgress, they are to be caught and punished, and the children … terminated with extreme prejudice.

Anyone with children – no, anyone with a pulse, will find the scenes of the brutal and instant killing of the babes in arms and the toddlers a challenge. But Bacigalupi, for my money, goes just up to the line of gratuitous, and does not go beyond it. He contrasts the squalor in which the mothers who are hiding from the law, with a different kind of squalor of those who play by the rules – a vacuum in which spending eight years rehearsing a complex symphony is deemed a fruitful use of time.

The finale is a tense one when the cop finds a young woman and a baby, and finds himself sitting and talking whilst deciding what his action is to be. It’s a tense climax, and it is left with a clear decision, but not a pat one.

An intriguing story – not only does Ryman give what feels like an accurate portrayal of modern Cambodia, but presents a story which has a feel of an Eastern one. A rich young girl finds love in a department store, but the ghosts of the many whose blood is on the hands of her father, stand in the way of that love finding a true course, and it is only by responding to the needs of these dead, and their living relatives, that she will throw of the shackles of her parenthood.

A lyrical ghost story and well worth the admission price.