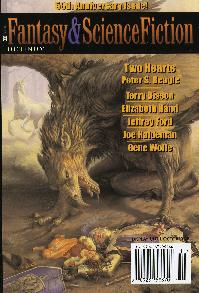 As before, he creates a quite unique setting on which to hang his story. The story is set on the Mississippi delta, near-future, but quite different from the society now, as humanity is reduced to mostly manual energy creation and utilisation, with what energy that is created being stored in springs for future use. He gradually explains all, as Lalji sets out on a mission upriver to bring back a man who just might have the answer to the yoke under which the agribusiness monopolies have been putting us under.

The imagery of a slower paced life, with most of the country turned over to agriculture, and the sacrifices which Lalji has made, is an effective one, and the story rolls towards the inevitable dramatic conclusion. I read this directly after reading Tom Purdom’s ‘Bank Run’ in Asimov’s October issue (not yet reviewed) and there is a stark contrast – Bacigalupi is a far more thoughtful, interesting story, with sharp detail and exploration of implications of the technological impact he has postulated, whereas Purdom’s isn’t. (It is at best, a simple ‘fast-paced adventure’.) Suffice to say, the story in hand would sit well in Asimovs, and Purdom’s would have been better placed in Analog.

One quibble though, is the editorial habit of placing cartoons to fill the otherwise blank space where a story finishes before the bottom of a page, which is one to which I object (you come to, hopefully!, the crux of the story and you’re distracted by a cartoon). In this case, to make matters worse, the cartoon also relates to calorific intake/consumption, which is doubly irritating. Sometimes a story warrants a bit of white on the page, the better to reflect on what has been written.

If you’re a regular F&SF reader I’d warrant you’d guess who Helen is. Yup, she of Troy. She is now in 21st Century America, her face showing some of the wear you would expect, although with a body to die for. In somewhat reduced circumstances, the male escort she hires for the evening gets more than he bargained for when he slips her a date drug and escapes with her jewels. She bestows longevity upon him, but we have been shown just how double-edged a blessing this can be.

A Real Estate broker receives a visit from someone claiming to be a representative of the race which developed the Earth and who wishes the illegal squatters (us!) to vacate the land. Fortunately, he is able to back up his claim. However, in terms of intergalactic deviousness and cunning, it turns out that he has more than met his match.

Guth Bandar, noosphere navigator, re-appears for more adventures, perfect for those who feel that you’re getting a bit too old for Harry Potter.

To be fair to Hughes, I’ll point you to Lois Tilton’s review on TangentOnline, an altogether more favourable review which does point out that rather than being based on the work of Teilhard de Chardin, as some of you readers might suppose, it is of course rather based on the psychological theories of Jung. (How any of you could make that mistake I will never know!)

Terry Bisson. Billy and the Ants.

Har har me hearties, and pirate tale to tell, has old Wolfy. A young woman finds herself drawn to the remote Caribbean island that pretty much everyone else gets the willies from. There are strange powers at work, and when her lover comes to visit, he finds himself an unwitting vessel….

Once again, Wolfe provides that little bit of extra something.

A shorter piece, complementary to the Friesner story, in which Zeus turns up at a sex addiction clinic.

A Silurian Tales story in which someone with somewhat non-mainstream theories comes up against hostility from those with ‘proper’ qualifications. As I’ve mentioned before, Utley could continue writing these stories until the cows come home, as we say over here. (Mr Utley – can you hear the moo-ing?!)

Part of a thematically linked series of stories which draw on ancient Greek myth. Sadly we never covered ancient Greek myth at school, and I’ve not rectified that omission in the quarter of a century since, so apologies for my shame failings in the erudite department.

A sad, mournful mood piece in which an observer marks the fall of yet another empire (ours).

Another does of Greek myth, in which boatman Charon, is given help to challenge the task with which he is charged for eternity, and in which he finds the pen may be mightier than the sword (or paddle).

I’ll have a second mini-beef at editor GvG, in that his introduction mentions that the story is a tear-jerker, which rather spoils the fun of the reader finding out for themselves that a bit of grit has got my eye no it’s okay just a bit of hay fever maybe cough on the train. What a spoilsport. Especially for someone like me who regulary sits down to watch a film with a box of tissues next to me. (Did someone mention baby lotion?)

Beagle goes back to his 1968 novel ‘The Last Unicorn’ to re-introduce Schmendrick and Molly Grue. I’m guessing that only a very small percentage of F&SF readers will remember this, so the story has to be evaluated as a singleton and, it measures up well. I’m not the biggest fan of fantasy, as you may have (ahem) spotted if you are a regular BestSF.net reader, but kept me intrigued as I followed the last noble sortie by an old king. Somewhat redolent of the scene from Peter Jackson’s LoTR when the faded king under the spell of Sauron, is freed from his shackles to ride off to smite his way to a last, noble sacrifice.

He is out to redeem himself by killing a griffin which has been terrorising a village, and manages so to do, with the assistance of a young girl, her faithful dog, and the titular Last Unicorn. Doubtless an added layer for those who have read and remembered the original story, but with a faithful doggie flung to one side, crushed and bleeding, to expire in front of its young mistress, oh, I’m welling up again……

Chock full of protein for the brain, with only a bit of excess fat and carbohydrate. To burn off those calories I’m off for a bit of ‘fast-paced’ Asimov’s action…..