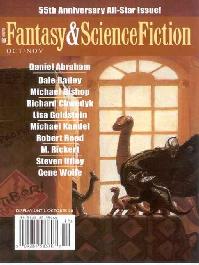 Fairy Tale which looks at the Sleeping Beauty story from Prince Charming’s perspective, with the added twist that the beauty which he revives is not in the first flush of her youth, and is mightily unimpressed to be resurrected as an aged crone.

But Charming is an honourable chap..

Fine if you like this sort of story, but they tend not to do a great deal for me personally.

A dark take on longevity. With people living into their several hundreds, it can be difficult to keep track of all those relatives. And life can become a bit of a chore. Tim’s dad opted out a while back, and whilst prevailing upon old (very old) Uncle Carmine, to attend a family wedding, Tim suddenly finds himself fazed by it all.

Utley returns to his Silurian Tales sequence, only through a somewhat different perspective – an academic article which investigates (with footnotes and references) the graffiti carved upon one stone by those studying the prehistoric Earth.

Dale Bailey. The End of the World As We Know It.

One of the stronger stories of the year. Bailey takes on the post-apocalypse challenge, and comes up trumps. We see a near-future American survivor, and his early attempts at coping with events, interspersed with snapshots of historical apocalypses. The stories rises above the average through the main character, Wyndham, who, as we see with heartbreaking clarity, is more bereft at the loss of his wife than at the bigger picture.

Unnervingly, as I read this story mid-Jan 2005, some couple of weeks after the Dec 26th 2004 Tsunami, Bailey wraps up the story with a reference to Krakatoa, and the ensuing 30,000 tsunami related deaths back in 1883. Wyndham/Bailey muses the nature of the Supreme Being who allows such things to happen.

Michael Bishop. The Angst of God.

The alien Ztun take it upon themselves to scour the galaxy, imposing their will on those whose behaviour is deemed unacceptable, and re-educating individuals whom they see as being guilty of reprehensible crimes. The Ztun have God on their side, so that’s ok.

General ‘Pit Bull’ Draper is the human who is taken far away from Earth for re-education, only to find the Ztun change their minds, and he is enabled to return to Earth to make further use of his particular skills.

During a cold, long winter, a couple exchange stories on a dark night – she of a tale of a strawberry-loving beauty, he of a man obsessed with a beauty, whom he must paint – again, and again.

A v-e-r-y disturbing horror/psychological thriller. In order to help his daughter feel part of a family one her mother has left, her father draws her outline on a long sheet of paper, and this Flat Diane travels amongst relatives scattered across the globe, as they welcome the 2D representation into their lives, allowing her some vicarious connection. Abraham handles the emotional angst of father and daughter well, and the story works well purely on that basis. However, Abraham ratchets up the story several clicks, as the Flat Diane comes into the hand of a very undesirable man, whose depredations are in fact very much vicariously experienced by the girl. With social services involved, and child sexual abuse on their list of possibles, the father finds that he has to take matters into his own hands, to protect his girl.

In his intro, editor Gordon Van Gelder admits to their being no space opera in this issue (tsk, and this being a double issue and all) but does encompass High Fantasy through stories such as this.

The eponymous heroine is indentured to a crotchety old wizard, who has to change his ways when young men come a-courting, and a Fairy Godmother appears with only the best intentions.

An epistolary tale (a story told through letters) in which Wolfe very cleverly draws the reader into a story which is much deeper than the first letter suggests. Ivy, it transpires, is not simply an elderly relative living in the country, as we find out through the missives of hers which describe how she bends the wills of several who come her way to meet her own needs.

A futher installment of the anthropomorphic dinos, in which Tibor and Geraldine are in conflict over whose the daddy. The charms of these stories obviously please a lot of readers – I’m evidently immune!

For me Dale Bailey is the standout in this issue, with Abraham, Kandel, and Bishop providing strong non-fantasy contributions.