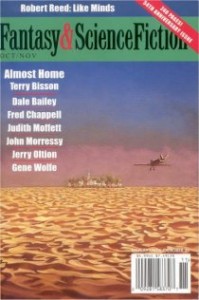 Moffett has written a couple of novels featuring the Hefn, an alien race who are benignly running the Earth.

Here, in the remote American wilderness, a scientist studying bears in the wild is piqued to be re-located to study elsewhere. Such is his strength of feeling that he risks all to remain with the bears. In doing so he stumbles across a secret that his re-location was meant to keep from his, and humanity’s, prying eyes. The nature of the Hefn’s presence on Earth is thus revealed.

Works well as a singleton, although familiarity with the novels will give added value.

Four short takes on what benefits immortality may, or may not, bring to humanity/

In which we learn of Icarus’ fate, and the life he makes for himself which perforce is distanced from that which he left behind we he took to the sky in his feathered wings.

The course of true love does not run smoothly for Brownell Lofton as the object of his passion/fixation is one of the youth who have followed the fashion set by the inscrutable alien Yuennin. What that fad is left behind by for a newer one, Brownell decides to remain rooted (almost literally) in the alien mode.

A dreamlike story, in which a young girl and her mother find themselves in an increasingly strange setting, before the girl finally finds an answer to the loss of a relative.

A charming story, as the editorial intro claims. An AI in a family SUV-equivalent shares a dream with the young boy – to reach for the stars. Their paths cross a couple of times in the future, and the AI is able to re-enthuse the young adult, and the pair are thus able to achieve their shared ambition.

A stark contrast to the previous story. A young man working for the Census Bureau takes a wrong turning – my, how he takes a wrong turning! In the depths of the southern swamps, he finds a small community who are quite literally off the map. And a bit like ‘Hotel California’ – once you have checked in, you will never leave.

As interactive virtual entertainment begins to offer us almost unlimited opportunity to explore our fantasies, Reed takes it to the n>th degree, with godhood on offer to those who reach for it. But in reaching for it….

The story starts with a typical small-town America setting, young kids on their bikes, going fishing and exploring the old sports stadium. However, things start to get a little strange. One of the gang is chronically ill, and as things get increasingly desparate for her an opportunity presents itself : a combination of decrepit buildings and railings at the racetrack starts to looking like an aeroplane. If they can get it to fly….

Bisson paints, vividly, the journey of the three kids as the fly out of the town they know, and across a desert wildnerness, until they come to a town very like their own. Very like their own. But not their own, as there are subtle differences.

For the two boys, finding their alter egos is a shock. For the girl, finding her mother (alive!), and finding herself only mildly disabled, the new town has many benefits over the one she has left behind. And so, of course, she opts to stay behind, leaving the boys to return by themselves, and to face the music for her disappearance. Except that once they return they find that in their worlds she has passed away quietly.

A strong list of authors (nice to read a Judith Moffet story after a long gap) who come up trumps.