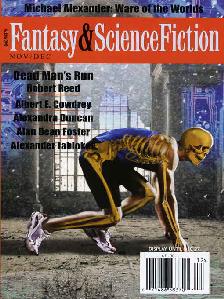 Now an expert in the subtle science/art of designing how urban spaces can best be used to influence behaviour of those using those spaces, an ex-partner uses a trick of his own to throw light on an event almost long-forgotten, highlighting the plight of a young girl killed under the tracks of a streetcar at the turn of the century.

Originally online on shareable.net, a very subtle and sharp look at a near-future where pretty much everything has gone to wrack and ruin. Without giving too much away, the person providing the monologue isn’t the most likeable narrator, and you do get to see the view from the other side of several fences.

Currently still online here and worthy of 15 minutes of your time.

Truth be told, the fanciful fairy tale ‘reboots’/retellings that F&SF regularly feature have largely left me unmoved, but this reimagining and updating of a Brothers Grimm story warmed my festive cockles.

It’s a neat enough story in itself, but the twist at the end – the nature of the warning in the fairy tale – is as delicious as a warm gingerbread cookie…

As I’ve mentioned before, I’m somewhat less appreciative, as a rule, of Reed’s stories which draw primarily on his daily life, than those in which he gives full sfnal rein to his imagination.

This is a very lengthy look at running – something he has looked at previously. There is a strong sfnal element – a running club whose coach is murdered, have both a Prime Suspect (a fellow runner) and the uploaded backup of their coach available to help them (including through their bluetooth cell phone earpieces).

Having been a runner myself back in the day (ruining two knees in the process), I was able to engage with a lot of the detail in the story about running. But, truth be told, somewhat like a marathon running hitting the infamous wall at about 23 miles, I found myself running low on energy at about halfway, and found myself slowing down. There’s an extended chase sequence in the middle of the story, which rings absolutely true, but felt overlong for me. (Not quite up to the dramatic tension in the novel Marathon Man, which features a taut sequence where the protagonist, having had the dental treatment!, draws the lest vestiges of his strength and his strategy, to outrun the goons with guns).

And I pulled up before the end, deciding that there was no real reason to persevere, and several good reasons to bale out (like being able to start the Richard Bowes story that was next in the issue).

Bowes’ series of autobiographical (up to a point!) stories in F&SF have been a treat for some time now.

Coming closer to the current day, here the somewhat older and slightly wiser SF writer sets his story in a series of venues where he provides readings of his stories. Clearly those in New York SF circles will recognise the settings, and there are ghosts of SF writers past with which to contend, alongside a relationship with a young man with whom he has a bond that is anything but literary.

Seems that Mad Amos graced the pages of F&SF during the 1980s and 1990s, and here the ‘mountainous mountain man’ returns, dealing with an awkward customer who has cut off the water supply to a town in the remote Wild West.

Michael Alexander. Ware of the Worlds.

Alien technology arrives on Earth, enabling duplication of whatever what is desired. A solitary guy in the countryside finds his simple needs easily met, but how the rest of the planet deals with the opportunity it another matter.

The meek do in fact inherit the Earth, in a story that doesn’t really take the trope any further than it has been taken before.

A particularly unpleasant, self-centred, conceited guy starts his day emerging from his closet in his cycling day. We follow his day, which concludes with a sexual conquest in a bar, before he heads home and puts his stuff back into the closet. What will tomorrow bring?

A short piece written as part of a festschrift to Ursula K. Le Guin, which touches on one of the themes in her writing.

The Queen is dead and whilst there is mourning, it is short-lived, as the King will choose a new bride from his concubines.

The story follows the daughter of one of the concubines, a typically rebellious teen, in a near-future in which the environment has suffered, and a glimpse of a green plant is a thing of rare beauty, and one that offers a hope in the future.

The teen years can be pretty terrible ones, but Bisson creates an alternate-Earth which is even worse – especially for the girls. However, our teen heroine finds love in a very unexpected place : an event horizon out back of the school.