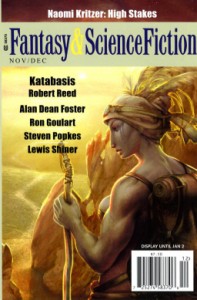 ‘Liberty’s Daughter’ appeared May/June issue of F&SF, and evidently had readers asking for a sequel, which Kritzer and editor Gordon van Gelder have duly provided. I was rather underwhelmed by the first story (review here), and was similarly meh about the first couple of pages and the skimthrough of the rest of the story, especially with the double whammy of having a teenage protagonist and featuring a reality TV show (a pet hate of min

A return to the pages of F&SF of mountainous Mad Amos Malone, involving oirish shenanigens with Peter O’Riley, mightily mustachioed Patrick McLaughlin, and some gnomes. A word of advice – if you’re Irish and you’re particulary sensitive to stereotypical portrayal of the Irish race, I’d give this one a miss if oi were you, sir.

It’s probably 17 years since I read my first story in the ‘Great Ship’ sequence – ‘The Remoras’, collected in Dozois 12th Annual Collection way back in 1995 (review here). And over the years Reed had produced several stories and novels (‘Marrow’) in the series.

This story shows off handsomely the opportunity the story sequence gives Reed to write stories against an epic backdrop. The unfathomably large galaxy-travelling construct that houses hundred of billions of mostly immortal beings of all races is a pretty good backdrop for opening up the writer’s imagination. Here Quee Lee and Perri have major roles, but the two intriguing characters are the non-human Katabasis, and the once-human Varid. The four are part of a group of adventurers taking on an epic journey in an extremely inhospitable high-gravity region of the Great Ship, which offers physical and mental hardships.

The journey progresses with flashbacks of an equally epic journey by Katabasis, she named after the Greek for a journey from a high place to a deep level of hell. The story engages the reader in the epic challenges, and the depths to which the soul is searched during the journey.

My only regret is that whilst stories featuring the likes of Mighty Amos Malone and Freelance Fudpuckulater Fotherington Fartingbrass appear regularly in F&SF, stories featuring Quee Lee and Perri are much rarer events!

Short but perfectly formed Dilbert-like vignette in which a jobseeker in a US where that is no easy thing to be, makes a surprise re-connection when applying for a job online.

An interesting take on a popular modern horror genre, in which a young man from a family of people who can achieve longevity by taking from strangers – not blood, it’s much more sophisticated than that. A young man is reunited with his long-estranged father, which raises questions about the morality of what they are doing, and just how far they should go

In which Jimmie and Morrie of Paranormal Services investigated, whilst in the midst of a lovers’ tiff, a poltergeist in a bedroom. It’s particularly inconvenient for the owners of the house, as they run a B&B, and it’s the best bedroom in the house. On account of it being the room that once belonged to the lady of the house, and through a bit of diligent paperwork, and visiting nearby antique shops (not entirely convinced about the stereotyping of proprietors as ‘queens’!) they come to the root cause of the problem….

Alter S. Reiss. If the Stars Reverse Their Courses, If the Rivers Run Back from the Sea.

A few days after reading the story I came back to it to write this and was surprised to find just how short it was – it had lodged in my memory as a more substantial piece. So clearly there’s a lot in a small space. Reiss accomplishes this partly through a story that is layered in its approach to time and the mutability of events and history, and what might have beens/will be. There’s some memorable imagery, some conflict, and all told a very strong F&SF debut.

Bob(s) comes face to face with his/their alter ego(s), and finds whilst he/they are a pretty mean dude(s), he/they might not be the meanest Bob(s) they they know. Things look bleak for Bob(s).

A neat story from Willrich.

Ron Goulart. The Problem of the Elusive Cracksman.

Further adventures of Harry Challenge in a misty London night in 1901.

A fantasy in which the male-dominated society frowns upon an upstart young woman who has desires above her station, and who has a yearning for the wide blue yonder. It’s a well-worn trope, but Kabza kept me engaged throughout, with Daybreak-under-Clouds finding someone who will help her, and manages her escape, with nary a backward glance….

A mighty fine issue, and, as usual, excellent value for money.