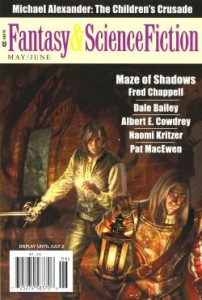 A slightly less effective story than Kritzer’s ‘Scrap Dragon’ in the Jan/Feb 2012 issue.

The setting is an interesting one – a string offshore artificial islands set up by Americans wishing to secede from the tax and governmental burden of the mainland. And whilst there aren’t taxes, there is bonded-labour, and an issue around this is the crux of the story.

Where the story suffers is in it zipping through quite quickly, with a feel of a YA story, both due to the teenage protagonist and her issues with her dad – mind you, maybe I’m even less enamoured by stories with teen protagonists, as not only are my teen years long gone, today marks my youngest son leaving his teens behind!

After a missing person is found (quickly), it transpires that there is a mystery behind the disappearance, but no sooner has the mystery been raised than it is resolved. And the story finishes with somewhat of a non-sequiter, with the sudden appearance of a letter from the girl’s mom (the absence of her mom not being a really strong issue in the story).

Ghost story in which young Willy Pfeiffer inherits enough money to dedicate himself to ghost-hunting, and in doing so, finally finds a role for himself in life.

An inventive take on wormholes and blackholes, and the relationship between the two – MacEwen has wormholes as organic creatures through whose body humans can pass, to travel between the stars. It’s a high risk method of transit, and young Jeanne is willing to risk everything in order to get some distance from what she needs to leave behind. Trouble is, said twin sister, has managed to follow her, and when the journey down the wormhole becomes even riskier, Jeanne has a choice to make.

The sister’s antagonistic relationship, and their celebrity status, and their recovery from an auto-erotic shunt to boost orgasmic intensity, are perhaps handled a little too lightly to sit perfectly at ease with the desperate, life-threatening migration they are taking – it feels like they’re taking the journey as if it was a greyhound bus to a neighbouring city, rather than one with far from a 100% survival rate.

Deftly handled amusing conceit in which a member of a gentleman’s club is found to be a rotten cove indeed.

A first-professional sale for Stewart, and an assured start to what could be a good career based on this story.

In a society where almost all ill-health has been banished, with the overseeing ‘Farmers’ controlling a lot of the city, there’s a black market demand for the common cold, and Jack is there to meet that need. Jack’s relationship with one of the cyborg Farmers in an interesting one, giving a bit of depth to the story, one which could have been given greater length. Hopefully it’s a setting to which he will be encouraged to return.

A story about a son’s relationship with his father, seen through the lens of baseball – but with a difference. Baseball traditionalists may want to avoid the story, as in this future many liberties have been taken with the game. However the stats are still there, even more so, with whole wall fulls of streaming data and video to consume.

Corradi handles the technology in the story well, with the son, like his father, employed in the industry of manipulating memory, which has become a big thing. The son is working on inspecting a memory involving a baseball game, when something doesn’t ring true, and leads him to explore his memories, and the role of his father in those memories, and gradually a much more complex father-son relationship unfolds.

A look at the problems of growing in to adulthood in the future – it’s bad enough already, but when you have to deal with not only your parents, but their parents, and any number of elderly, nearly dead, and even dead relatives, it’s even worse.

I-Chen Fisher has some pre-natal genmods thrown into the mix, and also her own awkardness, but her Grand Tour of Earth, to co-incide with her families’ Wanderjahr to Barnard’s Star, give her an opportunity to make that break.

A rural setting, post-something or other, with fragmented religions, and some dark elements to that religion. Young Will meets a stranger who visits the village in which he lives, and we find out more about the community, their beliefs, and the central conceit behind the story is unveiled, explaining why the community is as it is. Excellent.