The Magazine of Fantasy & Science Fiction, May 2006 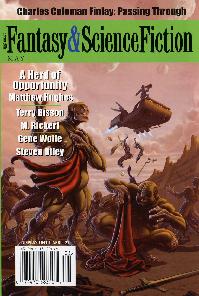 Matthew Hughes. A Herd of Opportunity.

Another tale of Guth Bandar, this one evidently from his early days, which will doubtless please those who like these whimsical tales. For me regular stories in the same setting go against my reason for reading short SF (ie different stories and characters) and as it’s not Science Fiction I’ll fast forward to page 52.

Not so much a tale with a twist in the end, but a tail with a feather in the end. A shorter piece, in which a woman finds out more about her father, and her own origins and that of her brother – no, not that brother, but one with slightly different DNA.

An interesting piece, if not one that rises to Wolfe’s highest standards.

A small island on the Great Lakes is the setting for a character piece in which an elderly lady finds a married couple, an African-American and a white woman, cause her to ponder the role of race in her life – both her current life (with some rather unpleasant racist comments from friends) and a life that she has left behind : or thought she had left behind. A ghostly presence, that is perhaps her own self haunting herself, is the fantastical element.

Robert Reed. Show Me Yours.

A claustrophobic piece of psychological horror, in which a couple in a small apartment are not quite what they seem. He, a young virile man, at the start, finds he is being confronted with the errors of his youthful ways, and even though it is some time since those days, there is a price to pay. The young woman in the apartment, is similarly not what she seems, and he is left with a choice that leaves him between a rock and a hard place.

Another in Utley’s series of ‘Silurian Tales’ in which a portal back to the past enables some story to be told, in the way that the 1960s TV series ‘The Time Tunnel’ used an sfnal device to trot out something that wasn’t every SF.

Ditto this series, and here we have a couple exchanging views on the potential role of a Creator in the scheme of things.

Terry Bisson. Billy and The Fairy.

A further tale of Billy, who saw off ants in a previous story. The editorial intro suggests Spacemen? Unicorns? The President? and urges us to stay tuned. It only takes up six sides, so on to p105.

An affectionate and humorous auto-erotic updating of Jane Austen, via Asimov and Slaked, with Mr D’Arcy’s role replaced by a robotic Roderick, a very complete Roderick

M. Rickert. Journey into the Kingdom.

A watery ghost story, with a barista in a coffee shop with a tale to tell, and a widower who falls for that tale, but he too has a secret.

Hughes, Utley and Bisson provide further instalments, although in series that aren’t that strong IMHO. Lite on the SF, and for me the pick of the bunch are the Reed and Rickert ghost/horror stories.