The Magazine of Fantasy & Science Fiction, May 2005 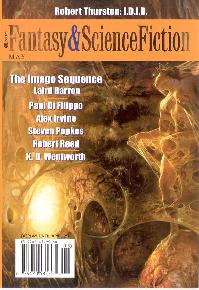 A long-term smoker sources some dubious cigarettes, and finds that her lungs have been subtly changed by inhaled nano-tech. One of the beneficial side effects of the nanites is an improved singing voice, which she uses to good effect. When pneumonia finally takes her, she finds that the nanites have taken the shape of Enrico Caruso to accompany her on the next stage of her journey. A germ or two of ideas in the story, but not really impactful.

Alex Irvine. The Golems of Detroit.

A macabre and memorable setting – an alternate reality where the Allies in WWII are using soil from Europe to create Golems to fight the Axis Forces. Utilising ancient Jewish mythology and US graft, the creatures roll off the production line. We learn of the war through the banter of some tough guys who labour all day in the factory, and their role as men and as non-combatants. This is a standalone story from the author’s forthcoming novel ‘The Narrows’, which on this basis, should be worth checking out.

Teen angst is bad enough, but when one of your siblings is a clone of Jesus Christ, you’ve got bigger problems. Wentworth guides us through an eventful day, in which a group of such clones attempt to resurrect a dead human being (problem being the said resurrectee has not yet been deaded and is not partcularly keen to attain that state). A quirky idea and the story is fine as far as Wentworth takes it (although is is probably a germ of an idea which can germinate, but can’t grow beyond a little seedling).

The photographs can have an impact on the viewer, and have had a history of having a major impact on the owners. One has changed hands, and the new owner shows off his new prized objet d’art, and sets one of his employees the tasks of identifying the location of the third in the sequence (the second being on display in an art gallery).

He is aware of being sucked down, but is powerless to resist. A truly grotesque ending seem him being forcibly trepanned in order to better appreciate the Imago sequence, but he is able to escape his tormentors and attempts to flee. As is oft the case in such stories he comes face to face with the horribly disfigured creature which is captured, screaming, in the molten amber which will embrace it/him for the future.

A minor piece by Reed, in which the politicking behind recruiting a new Head Coach for an American sports team is echoed in the choosing of a new local deity.

A bit of a mish-mash. Yesenia is looking after some ETs who have arrived on Earth. The ‘Loshaks’ as they have been named are rock-like creatures, who have grabbed the attention of the world’s media for a while, but interest has been waning. Yesenia has been studying them, and on her return to ‘civilisation’ finds herself confronted with some changing mores and languages, and identity roles. There are some quite amateurish co-incidental meetings of characters, and juxtaposition of meetings and events (duh, she just happens to bump into that loud mouth guy again at exactly the moment the television shows the aliens leaving?).

The standout is the Laird Barron story, with Irvine a close second – two quite vividly imaginative stories. The remainder are quite forgettable.