The Magazine of Fantasy & Science Fiction, May 2004 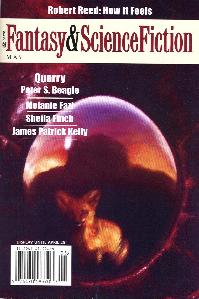 A Best SF Review-LiteTM, on account of my having read this issue about a month ago and not having the finer points of the stories in my mind any more.

Robert Reed. How it Feels.

How what feels? Alien possession. Not the icky bit about the how they get in, but the interesting bit of how it feels to have nine or so noncorporeal alien beings spending time between your ears, and the reactions of those around you. Pauline is suprised to be so signally honored, whilst her girlfriends are bitchilly jealous. She gets her own back on her not very nice boyfriend who has been an pain in the ass and on whom she gets a very appropriate revenge, and is left musing with a new friend on the nature of the alien possession, as Reed takes a gentle offbeat approach to another sfnal trope.

Sheila Finch. So Good a Day.

Death pays a visit to the waters of the English Channel during the evacuation of Dunkirk, with a couple of famous British soldiers, linked across the ages, on a small boat heading to the rescue of the stranded soldiers.

A first published story which takes a short look at the frog prince tale from a slightly different angle.

Translated from the original French by Brian Stableford. The murky waters of the canals of Venice have embraced his lover, and in avoiding a similar fate for himself Giordana Salvaggio has to make a compact.

A short tale of a long run. A race which takes a lifetime, and takes up lifetimes.

Richard Mueller. Jew if by Sea.

I’m not entirely sure about this story, to be honest. An alternate reality, where the main focus of the alternate angle is the story line which resolves into the use of ships to provide the Final Solution, rather than gas chambers. A little tasteless to my mind, and I’m not sure what the story is intended to convey.

God has another go at the Garden of Eden, but that pesky Serpent is up to his tricks again.

Fantasy story in which two men, with voracious enemies on their scent, join forces to make a last-ditch stand against their foes.

Whilst it is a while since I read the issue I can recall that it was only the Robert Reed story which really stood out in the issue. But I can vouchsafe, forsooth, that none of the above will feature on ballots or appear in any of the Years Best anthologies, which if the yardstick against which I measure.