The Magazine of Fantasy & Science Fiction, May 2003 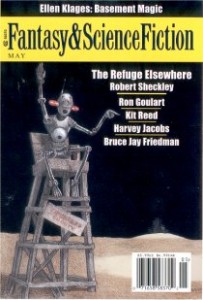 A tale of a young child with a wicked (well, not very nice) step-mother. Somewhat redolent of Roald Dahl – a melange of George’s Marvellous Medicine, and The Witches, with the young girl using good ol’ fashioned simple magic, with the help of the latest in a long line of nannies.

Even with the step-mother taught a lesson, Mary Louise decides that a rodentary future with the nanny, Ruby, is her best option.

Bruce Jay Friedman. Protect Yourself at all Times.

A elderly boxing fan, with little to live for except the boxing on TV, finds one particulary, especially brutal ding-dong of a fight does actually take place in his living room.

I’m not a particularly great fan of Goulart’s gumshoe robot stories, (latest story in the Jul/Aug 2003 Analog), and he doesn’t quite tickle my fancy with his stories about Victorian gumshoe Harry Challenge.

In this story Challenge has to solve the mystery of a missing Steam robot.

A Professor of Anatomy finds that there is a very small bone in the human body, which appears to be inscribed with the date of death of the human in question. And?

Well, there isn’t an and.

A commuter finally cracks, and leaps from the train that has been his regular route to work for a long time. He unvravels psychologically, wishing that life where like the computer game Zork with a couple of simple options to be followed at any one point.

Not a particularly encouraging story to read whilst commuting to work on a train!

John Morressy. The Curse of the Von Krumpelsteins and Other Horrors: Contents of Volume I.

In which seventeen dramatic chapters are reprised in seven pages.

Heck, some SF writers have built careers on fewer ideas!

An unsettling story. Aurora Platz has lost a locket, and employs Joe Luna to find it. Against the odd, Luna manages to find the locket. And his capacity to find things which have been lost, long lost, appears to be without bounds.

Aurora finds herself retreating further back into her life, finding more and more things that she had thought long-lost. And not just possessions.

She ends up in Luna’s pocket. Literally.

A minor character in a VR drama finds her chance to take a more starring role. But she has to do the dirty on the star. Will she go that far?

An interesting mix. The story starts with an FBI informer finding that once against his anonymity has been compromised and the Witness Protection Scheme is failing. Somebody, somewhere, is leaking.

But in fact there is a more interesting solution – the mafia boss is employing individuals with psychic powers to identify where he is holed out.

The plot then shifts when Harry finds his only way to safety is to escape to a fairy-tale-ish place, which is in-between, so to speak. And there he finds true love, but his future there is threatened, and dark deeds must be done.

Nine stories, no less! Whilst variety is the spice of life, this number of stories by necessity means that most are of a shortish length, and the issue is a bit like a stand-up buffet. Lots of tasty morsels, but no matter how many you eat, you don’t feel sated!