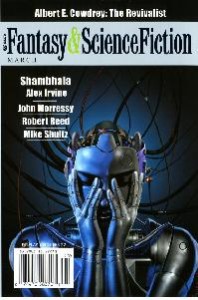 The story was inspired by the illustration by Mark Evans which graces the cover, and is, like the cover, an excellent addition to a previously well covered trope.

Irvine considers a future in which uploading to a virtual reality has been chosen by many, and looks at just how precarious that life might been when the underlying tech causes problems. Shannon is in the virt, which is becoming an increasingly unstable place to be. Those who have uploaded – who have been Squirted – signed up to a one-way process, and there are few options for them, thanks to the Kuntz who was responsible for the orginal uploads. The virtual people are just pawns in a game of big corporations….

Irvine handles the story well, with a touch of the Strosses, in a story which sets the issue off very strongly.

John Morressy. The True History of the Picky Princess.

After a strong SF story, a gentle take on a fairy tale of the type that appears regularly in F&SF but which really don’t do much for me, as they tend to be just too same-y for my liking.

As with the Irvine story, Cowdrey covers ground well-trodden in SF/horror – longevity. We follow the life of a young man born in the early part of the 20th Century, who can just sleep and sleep and sleep. And when sleeping, his body is able to in effect combat any ageing effects, so that the more he sleeps, the slower is his ageing. Cowdrey follows him through his life and his loves during the rest of the century in an entertaining manner.

Trent Hergenrader. From the Mouths of Babies.

A shorter story from a Clarion 2004, and his first in print. As with many stories by new writers, there’s an interesting idea, but the story doesn’t go as deep or as wide in looking at that idea as it would in the hands of a more experienced writer. A young boy, brighter than his six years, and his father, are holed up in a motel room. Through their conversation we find out the exact nature of the boy, and their relationship, and the threat they are facing, until the doors crash in and the threat is in their fac.e

A school class in which goblins, other creatures, and humans are integrated. Well, up to a point, as the teacher struggles to maintain discipline,

Crime doesn’t pay, as Czesko finds out. He’s dead, but refuses to lie down without being baptized. Ashes to ashes, dust to dust, and his partner in crime tries to persuade the cops that the white powder in those bags is indeed the mortal remains of Czesko and not Charlie.

Irvine, Cowdrey and Reed are my picks of the issue, with Morressy and Shultz providing some fantasy fun, and Deal some crime comedy. Hergenrader takes a first step in the genre, and praise to F&SF for putting in stories by newcomers when they could presumably have half a dozen Robert Reed stories each month!