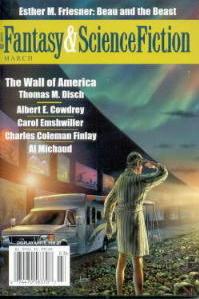 In which a young journalist (in New Orleans, natch) meets a lady with an amulet which she says bestows longevity on the owner, provider you follow the rules. She relates the histories of some of those whom have owned said amulet, and how it changed her life.

A shorter piece, but far more in it, albeit somewhat perplexing. It is set in near future North Dakota, in which a large wall which now separates the US and Canada – something both parties are evidently happy with. Lester is one of many people who have leased space on the wall to paint large canvasses, and he spends two months alone each year painting, watching the Northern Lights, and drinking.

A drinking session leads to Lester upping sticks and departing for pastures new (and unknown to us).

We met Clem Crowder and his lobster, Clawdius, in July 2003. Here Clem is tempted to part with his lopstah when a smooth talkin’ Texan turns up. What the hell happens I have no idea, as this time around I just couldn’t be arsed following the dialects for the 40-odd pages of the story.

Granted they are entertaining, lively characters, and it does have a quirky setting, but one story in the setting was enough for me.

Carol Emshwiller. I Live With You.

Letterman gets more than he bargained for in a slot on his show – (Shockley presents a transcript of the segement for out delectation).

Further adventures of Maggot (‘Democracy of Trolls’ Oct/Nov 2002), the boy brought up as a troll. Here he has his first introduction to human women, and, boy, does he get the horn.

Somewhat bizarrely for a boy raised as a troll, having a description ‘she wore tight fittig pants and a loose, open-breasted shirt’ does jar. Maggot’s adventures will be available in novel form shortly. You won’t find me in the queue.

Esther M. Friesner. The Beau and the Beast.

The pick of the issue for me. A series of letters from a young English lady, starts with one written from the Prince Regent’s entourage on Brighton (England) seafront, 1819. Caroline is spending time with her aunt, who is clearly bonkers. However, Caroline falls in with an even odder lot. Just how odd is carefully revealed, and the C’thulhian denouement is a corker.

Disch, Emshwiller, and Friesner provide something that bit different, the former giving you pause for thought whilst reading them, and the latter giving full value for money.

I personally feel F&SF just errs on the wrong side of the balance in mixing new stories with further adventures in settings previously visited – and here, to take up so much space with Michaud and Finlay providing follow ups, imbalances the issue.