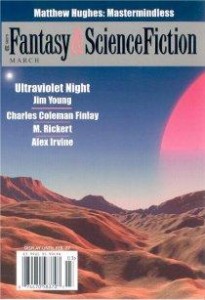 The protagonist realises with a start that his facial features and his intellectual capacity are suddenly less impressive than they usually are. Fortuantely his AI is still AOK, the I remaining an I rather than being reduced to i. Worse still, he is financially in reduced circumstances. Evidently transdimensional nefariousness is being enacted.

Your enjoyment of the tale will IMHO hinge on the extent to which you like the smart alecky tone of the AI and the banter between the two. Suffice to say, I struggled through the story, and coming to write this review a few days later, have no recollection of the denouement.

The intro tells us that Young is expanding this novelet into a novel. I’d be tempted to urge him not to bother, except for the fact that it’s the kind of ‘science/SF thriller’ that has appeared many times in recent years as vehicles for B-list starts – Claude van Damme, or some of the weaker Schwarzenneger/Bruce Willis movies.

The novelet reads almost as I would expect a story skeleton would be put together to pitch an idea to a producer. The 42 pages features 46 numbered ‘chapters’, in which an at times bewildering number of (generally cardboard cutout) characters are introduced. Worse still, it reads like it has been written by a writer who has never written SF before and is ‘having a go’. The closing sections are written visually – as if the writer has a big screen picture of what is happening in his mind, as opposed to writing a story.

A very weak story for F&SF.

A regular F&SF writer with a ‘story’ much more in F&SF style. Mental illness, or magic? is the question, as we enter the mind of a young woman whose dark past is gradually revealed to us, as are the effects of that past on her life.

A bizarre piece of fiction, whose opening line sets up the story nicely : “There are two kinds of people in the world, homosexuals and hydrosexuals. Finlay posits a world where same sex love is one norm, and those in the small minority who find the opposite sex attractive, quench their urgings in spawning pools, where the young men wade into pools into which the females have lain eggs, to perform their onanistic part of the ritual. The young protagonist does not fit either camp.

From the author’s recent collection ‘Unintended Consequences’. An armed robbery goes wrong when Greg’s dog barks at an inopportune time, and his co-robber, Arthur, collects a fatal wounde from the driver of an armored car. Greg duly gets caught and does his time, but is saddened upon his release to find that his dog has died. On top of that, a very, very nasty local hood is convinced that Greg knows the whereabouts of the cash which the mortally wounded Arthur had taken away from the heist.

Greg fears that the hood isn’t going to believe that he genuinely doesn’t know, but is saved from the hood by … his dog?

One of the weaker issues of late, with Finlay the only one providing a story which will stick in the mind.