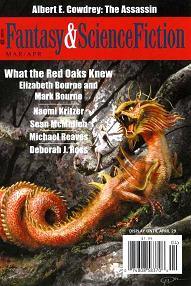 Quaker Thomas finds a runaway slave outside his cabin, followed in due course by one seeking the return of the slave to his owner. It’s pre-Civil War, and Thomas is willing to stand up for his belief in the evils of slavery. The nature of the slave catcher throws this into relief, along with the nature of the human soul, and his subsequent trial has an impact on a lady who herself will have an influence of the eventual abolition of slavery.

Chilling, nightmarish horror as a man and his son try to escape from some strange caverns – leaving them far different from when they entered.

Further adventures of teen Beck Garrison on the independent sea-stead communities, facing up to the latest challenges, with her dad, as ever, on her case. (And I’m like, whatever)

The title of the story works better here in the UK, with 999 as the telephone number for the emergency services. Reaves inverts that number, and, as you might guess, this tale of paramedics and their conveyance takes a nasty turn…

A much darker story than you generally get with Cowdrey in F&SF. As times brutal, it’s a near-future story of politics, opposition to the ruling regime, and the decisions people have to make when it’s time to stand up and be counted.

Elizabeth Bourne and Mark Bourne. What the Red Oaks Knew.

There are some funny types out in Arkansas, I do believe, and in this modern fantasy, some even curiouser happenings. Taking the name Jimi Bone, a young boy heads out into the hills, with something strange in the boot of his beat up ’98 Ford Focus.

He picks up a partner on the way, a rabbit-red eyed albino girl, who is pretty strange herself, who has issues and a need to confront one Midas Welbe, a man from the hills with some powerful magic at his fingertips.

Intriguing, and wondering already what happens next…

Steven Utley. The Boy Who Drank From Lovely Women.

The ruminations and reminisces of a man far older than he looks, and he ponders his mostly mis-spent youth, and his many loves, including one in particular that has led him to his current state of affairs.

Excellent SF. ‘What makes a person decide to desert everyone she knows and leave the whole world behind?’ ponders the narrator, one Emzara Ghali-Gordon. A woman who through study left one part of her behind, she is the scientist behind a technology that allows us to reach for the stars.

By a process of ‘sonoporation’ sound waves enable DNA tweaking to slow down the body and thought processes, so a long time can pass in transit without it impacting on travellers physically or mentally. An interesting idea (doubtless done before, but not that often as I can’t recall it being used before). There’s a problem below, which relates to the decision referred to in the opening line, and it’s handled well with a viewpoint and characterisation that takes it beyond what could have been scientist fiction elsewhere.

Chet Arthur. The Trouble with Heaven.

Drier than a dry martini, Arthur provides a blackly humorous look at life on an orbiting habitat for the ultra-rich, and how the wealthy inhabitants behave, how their spoilt children mis(behave) and the lives and loves of a diplomat, a journalist, and a droid who is more than she seems.

In the reign of Emperor Gaius Julius Caeser Augustus Germanicus, a hunter of escaped slaves finds he is more than met his match with a woman with strange powers.

Wowza, an issue bulging with 10 stories, with pretty much something for everyone. Van Aaron Hughes and Albert E. Cowdrey being my picks.