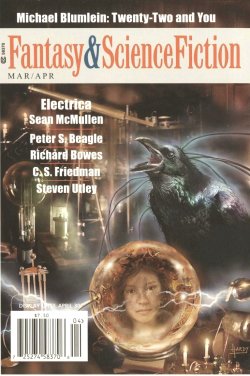 A grieving woman is visited by the close friend of her recently departed lover. Over a few glasses of wine he explains the nature of that departure, and the nature of the job they do – moving between branes, fixing holes that could damage the multiverse. Fine as far as it goes, but having opened a little through which much more could be seen, Sullivan leaves the reader with just that tantalising glimpse

Humorous short which looks at a potential (very near!) future world dominated by apps, advertising and a consequent lack of free will.

Ending up a corpulent, debauched character, who exploits his groupies of both genders, it appears that the author may have a pulling power beyond the grave…

Richard Bowes. The Queen and the Cambion.

The Queen in question being Queen Victoria, and the cambion (in medieval legend, a cambion is a half-human offspring of a succubus and an incubus, as any fule kno) in question being Merlin the Magician. Bowes takes us through the life of the queen, a life interspersed with contact with Merlin, who is called upon by royalty, both past, present and future, when assistance is required.

The first in Utley’s ‘Silurian Tales’ sequence for four years, a sequence he has had on the simmer since 1993. To be honest I hadn’t really missed the stories in the past four years, and this story is, as have others, been just another continuation of the simmer, rather than a contribution to bringing the series to a boil. Or if you want a boil analogy, the ‘Silurian Tales’ boil continues to grow and itch, without the blessed release of it popping.

More ne’er-do-wells from the deep south pop out from Cowdrey’s active/fetid imagination, the love of money once more being the root of all evil. Only question is who is going to be left with the cash at the end of the story.

Robert Reed. One Year of Fame.

The works of an author, long relegated to his past, find a new, robotic audience.

Michael Blumlein. Twenty-Two and You from The Doctor Diaries.

Near future setting which highlights a risk in a new genetic profiling/fixing treatment : what if the fix of a genetic weakness might come at the cost of a change to the memory. A young woman desperate to have children but who is near-certain to develop ovarian cancer after childbirth, undergoes the treatment, willing to take the risk.

The issues are lined up quickly and demonstrated, with the benefit of the contrast with the young woman’s mother whose generation didn’t have those options available to her daughter, with no real sense of the characters being other than there to get the narrative and discussion underway, rather than being characters to whom things happen, if you get my drift.

Kabza is like “I want to write a ‘punk that is like no -punk that has ever come before, just to prove how absurd the whole thing is” and I’m, like, “totes ‘whatever'”.

A verbose story about one Dr. Olfert Dapper that could easily be confused with a Matthew Hughes creation.

Interesting construction to a story, with the narrative being relayed between observations from the omniscient observer. The story : a frustrated musician uses temporal manipulation to enjoy the famous composer’s support.

Napleonic alternate history with a touch of the cthulhian terrors. A young officer, a code breaker, is despatched to a rural retreat in the English countryside, where some strange experiments are taking place which could revolutionise combat communication – taking it far beyond the use of semaphore signalling.

There’s evidently a novel in this setting in the pipeline.

An issue that didn’t really grab me, with even stories by some favourite authors of mine such as Reed and Bowes not quite up to their best, and the other stories not really offering anything really out of the ordinary (nb FSF ordinary being pretty damn good).