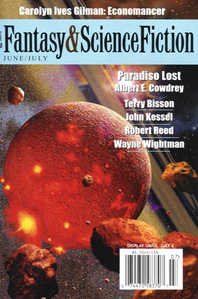 Prolific Reed is partly able to keep up his amazing output through dint of his capacity to mine his life, both recent and distant, for stories (to varying degrees of success, it has to be said, lest there be any suspicion that I am a Reed fanboy who will blindly praise all of his works).

When he gets it right he is able to create a palpable sense of place, and of people, and here is the case in which he, through the eyes of his protagonist, looks back half a century to less complex days of childhood, when anything was possible. He looks back on a childhood make-believe fantasy of a strange creature living just outside the town. (My own group fantasy was of the Sunday School teacher going into a small cupboard and a strange green light emanating from it. There were a few suggestions as to what was happening in there, but it wasn’t a fantasy that ran any length of time.)

Reed looks at how such a story could grow into the telling, growing to a point where enough people willing or wanting to believe in it for the story go gain a life on its own. And 50 years on, when the story becomes hot news again, one of the progenitors of the story has a chance to, finally, put a nail in the coffin. But things have changed in the last 50 years, both societal, technological, and personal, and it may be that the old story can be turned to good use after all.

Similarly, Kessel draws upon a recent sojourn in Prague for the inspiration and setting for a cautionary tale involving an antiques dealer who comes across a piece whose provenance is almost too good to be true.

And if things are too good to be true….

Short and mildly amusing marketing speak on the benefits of the artificial heart.

Further adventures of Colonel Kohn who previously appeared in ‘Tribes of Bela’ and ‘Murder in the Flying Vatican’, the former of which was well-received by many. I noted of the latter that it had ‘just a feel of 1997 or 1987’ about it, and this is very much in the same vein, with a very traditional space adventure murder mystery setting, with some 1950s style characterisations.

A story which starts with a cutesy Girl Scout selling cookies on the doorstep can generally only go in one direction, but Wightman takes it as far as is possible – complete annhilation of the human race! We reap what we have sown, in that the bugs on the planet decide to rapidly adapt to the threat placed on their survival by our impact on the environment.

We follow the decline through the initial offputting presentations, through the increasing impact, and with a final hopes of what is left of humanity returning to the Earth’s surface cruelly shattered.

An interesting take on the end of the world scenario.

Gilman wryly ponders what dark secrets may lie behind the workings of global market. (As opposed to rich bastards working hard to make themselves richer at the expense of everyone else).

Often such wry ponderings work well, but tend to do so at a much shorter length than this story.

The issue ends with its ying and yang nicely balanced, with a story that complements the Reed opener. Considering O’Driscoll is at the opposite end of the career spectrum to Reed, that is no mean achievement.

It similarly starts looking back on childhood adventures, and creates a palpable sense of longing for what is long lost, and what may be permanently lost. ‘The world was not as big as it used to be’ is the opening line, and sets the story off well.

A young trio, the protagonist Freddie, his best mate, Mouse, and a young girl new to the area, Jenna, find everything changes when Mouse claims to have met a spaceman in a remote part of the countryside in which they play.

The story revolves around having the courage to believe in something, and not to give up on dreams. Freddie finds himself unable to share the belief and is left behind. And the spaceman, from a failed Apollo 20 mission to the moon, is symbolic of our failure to have courage in the dream to reach for the stars, and that perhaps we as a race have lost our chance of being left behind.

Two classic reprints added further value to the volume : John Kessel’s ‘Retrograde Summer’ dates back to 1975, and is classic SF. Gary Jennings ‘Sooner or Later or Never Never’ is of a similar vintage, featuring ‘Crispin Mobey, a zealous missionary whose enthusiasm is matched only by his ineptitude’. (I have to own up to having a far stronger preference for the former).

Reed, Wightman and O’Driscoll are the cream of the crop, with Kessel’s new story, Bisson and Cowdrey not quite up to their (well-established) best.

For the record, I re-read the O’Driscoll over an excellent liver and bacon lunch at the White House in Bladon, Oxfordshire, which has been serving beer since 1661, which is a setting pretty much geared up to making one receptive to the blandishments of a story!