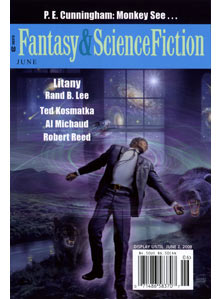 Ted Kosmatka. The Art of Alchemy.

Excellent SF/science thriller. It has a sense of place (the dying little steel towns of NW Indiana), and has an interracial relationship : it brings you up a little when the issue of race between the protagonist scientist and the attractive young science politico is raised, in that its novelty suggests that the complexities of real-life issues don’t regularly appear in SF.

The scientist is at the leading-edge in working with metal with a memory – metal which can remember and revert to, a specific shape they are designed to be in at a specific temperature. The drama is set up straight away (with their relationship being developed through flashbacks) as a shadowy Eastern European offers them some even more hi-tech, at a price. What he offers is something that would pull the rug from under the dominant steel companies – a carbon nanotube : immensely strong and virtually invisible.

The couple are in a quandary – if they hand over this tech to their parent company, they will sit on the new tech in order to maintain the status quo with steel as a major player in the world markets. The alternative : putting the tech in the public domain, and seeing what can be made of the tech. However, the steel companies are on the case, and will go to any lengths to get their hands on the nanotube sample, and the story reaches a dramatic, murderous, climax.

An older woman divulges, in her final months, a story to her lifelong friend that she has kept close to her chest for decades. As a young parent, her toddler son, Fergus, had disappeared from the apartment they were staying in. At first it was one of those dreaded nightmares – the boy stepped into an elevator in the apartment ahead of his parents, just as the doors closed. The elevator heads off, and the boy is never to be found.

This is not the end of the story, as the older woman explains that she he did see Fergus a couple of times, in both cases the young boy rushing into her arms, calling ‘Mummy’. However, these instances were many years after the disappearance, with the toddler being exactly the same age. The mystery isn’t solved, and, indeed, after the older woman’s funeral, another Fergus makes an appearance.

Al Michaud. The Salting and Canning of Benevolence D.

In July 2003 I noted that Michaud’s ‘Clem Crowder’s Catch’ was a promising debut. In March 2005, in the followup ‘Ayuh, Clawdius’ I found that the charm of the colourful characters and setting had waned, and that one story in the sequence had sated my appetite. A quick skim of this lengthy repast suggested that indigestion would surely follow if I attempted to partake of this further course.

Very short piece from Reed, which feels like an hour’s work at the keyboard to get a germ of an idea down. The story is germ related, but didn’t really infect me.

If you’ve had too much cod-medieval fantasy of late, how about a serving of oriental fantasy by way of a change? In which a female warrior on an errand for the emperor is monkeyfied.

A more contemporary fantasy, and much more to my palate. A gray-eyed man moves into town, travelling under the name Anderssen. He’s been travelling a long, long time, and may be about to come to the end of his journey, and the property he is moving in to is to be a base for seeking one who he has been seeking a long time.

There’s someone following him – or, rather, something : as the gay PA in the Realty firm finds out when he falls under this bad dude’s spell. The pieces of the jigsaw are falling into place, and there’s a confrontation to be, er, confronted.

An issue bookended by two strong stories. If you sampled the previous Michaud stories and found them to your taste, you can feast on a further supersize portion from him.